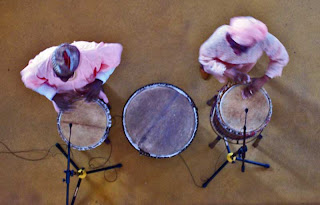 There's an absolutely astounding update now at the end!

That is what we're trying to figure out here at home. For those that haven't been around for very long Ben and I were artists in residence the last two Saturdays of September at the largest children's museum in South Carolina. You can read about here and here and here and here and here and here. There are actually three more you can find under "Family Art Projects" on our side bar. To say I've given the museum a great deal of props and good press would be a tremendous understatement.

But all of the joy, work, and education we accomplished is now being swept away due to the museum's handling of the invoice I submitted to them on September 29th, the last day we were there. From my construction days there is a derogatory term called "a pissing contest." I'm sure each and every one of you have had the unfortunate circumstances of having to participate in one (if not many) in the past. One side claims a "misunderstanding" while the other side knows there was no misunderstanding; this is what should've happened and we fully expect the other side to honor the agreement.

For some reason families with exceptional loved ones find themselves in way too many of these situations. The "other side" wants the negotiations to play out long enough so that the "right side" will finally give up and cave in to the "other side's" point of view. This is where our family finds itself at the moment. If EdVenture Museum in Columbia, SC wanted to remind us of how things usually go for special needs families during their EdCeptional Kids Month well they've done an excellent job of it with the Waddells.

The bottom line is that we have not been paid for our work there two months ago. From e-mails currently being passed between me and their Educational Director the likelihood of getting paid is still some weeks away. There is also now a threat of not paying us the full amount we are owed. Interestingly an African drum group from Orlando, Florida that performed on September 22 (the first day we were there) has been paid and quite handsomely from what I understand. What that had to do with Exceptional Children I'll never know.

I guess the folks down there in Columbia living just above the Gates of Hell don't realize how far I can piss when I get pissed off! I've already put in phone calls to some media friends who are very curious about the situation and how it will play out. Those folks also don't realize how many friends we've made by introducing Ben to the public and who truly appreciate the awareness we raise about disability issues. In fact it'll be somewhat of a shock to the organizers next September when they find a community of exceptional families protesting the farce known as EdCeptional Children's Month outside their door.

Yep, I realize I just set that bridge on fire but we're flat broke and need to pay our bills. So piss away EdVenture folks. I can assure you that not only do I enjoy bonfires but I've actually put 'em out before with the proper amount of personal hydration.

Update: about ten minutes ago (ten minutes after I blogged this) I received an e-mail that a check is in the mail for the full amount. There is no doubt now that those EdVenture ass-hats were trying to get us to cave in for a lesser amount. My view of the world just got even more cynical....

Here's hoping you get some action (money!) soon.

Glad you got it. Maybe they caved to the persuasive powers of your bloggy friends?

Agreed, LB. The check wasn't there today like we expected. Speaking of mail, something DID get to the post office today! I think you'll like it!