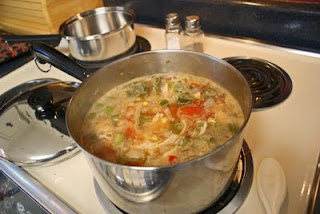 Like Frogmore Stew, this more soupy traditional Southeastern dish has several different varieties depending upon regionally favorite meats and vegetables. Like many southern dishes the origins are unclear. Both Brunswick, Georgia and Brunswick County, Virginia claim to have coined the term but there are plenty of other names associated with the stew. Here in South Carolina a similar dish made with rice is called "purloo" (pronounced pur-LOW) while Kentucky and Tennessee refer to it as "burgoo" (similar pronunciation). Of course most folks will recognize the more famous name the Cajuns of Louisiana call it: gumbo.

Each version of the concoction though has a two common ingredients: a tomato chicken broth liquid base creating a vegetable soup with meat added into it. Most recipes use shredded chicken as the primary meat source. Other meats I've read about in similar recipes include salt pork, pulled pork, hamburger, deer, duck, rabbit, fish, shrimp, crawfish, and even alligator. Our family prefers a less complicated version of the stew.

Combine all the ingredients except the potatoes in a medium pot. Bring to a boil for three minutes on medium high heat. After adding the potatoes reduce heat to simmer for one hour. Serve with fresh cornbread for dipping!

For gumbo:
Substitute cooked rice (2 to 3 cups depending on how thick you want your mixture) for the potatoes. Also substitute diced tomotoes for the whole peeled ones. You can also add ground red pepper or your favorite hot sauce for an extra kick.