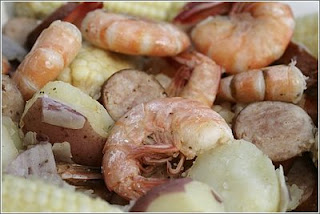 The folks over at PKSKids.net are putting together a cookbook as a fund raiser. Basically members of the organization have been asked to submit some of their family recipes. Yeah, I know. You've heard of this concept before. well this one should be a bit different given that we have PKS families located all over the world! I'm kind of excited to here how one prepares shrimp on the barbie in the Land Down Under. Now a recipe for haggis? Not so much.

Anyway, I thought I'd share one of my submissions with you today. With all this cold weather affecting just about everyone from Miami to Minneapolis I thought I'd try to warm your heart with a recipe traditionally served during warmer months here in the south.

There are several variations of this recipe that originated along the southeastern coast of the United States. Basically the difference in each region’s boil is the native seafood found in each southern state’s coastal waters. But several ingredients are always found in every boil: water, sweet corn, sausage, and Old Bay Seasoning!

For the record there are no frogs in Frogmore Stew. The funny name comes from the tiny Frogmore community on St. Helena Island near Beaufort, South Carolina. In fact some locals actually call it Beaufort Stew. The high brow folks in Charleston call it Low Country Boil. It really doesn’t matter what you call it other than delicious.

I have fond memories of eating Frogmore Stew almost every July 4th at my grandparents’ house in the mountains of northwestern South Carolina. My dad, grandfather, & uncles prepared our dinner next to the small lake on their property. This feast was the exclamation mark on a day filled with swimming, fishing, and fireworks. And let it be known that homemade ice cream sits well on a tummy filled with our native stew.

BASIC INGREDIENTS:
¾ to 1 cup of Old Bay Seasoning per 6 quarts of water
1 can of beer (your favorite)
2 cloves of garlic, crushed or minced
2 or 3 onions, quartered
Several lemons, halved
Redskin potatoes (depending on size, 3 or more per person)
Spicy smoked sausage, cut into 1 to 2-inch slices (¼ pound per person)
Fresh corn, broken into halves or thirds (1 ½ ears per person)
Shrimp (½ pound per person)
Melted butter
Cocktail sauce

ALTERNATIVE INGREDIENTS:
Crab, still in the shell but broken into pieces – we like Stone Crab claws
Scallops – we prefer the smaller bay scallops that have a sweeter taste
Clams – nothing better than the littleneck variety (cook in the shell)
Grouper or other hearty white fish.
My brother in Louisiana adds crawfish to his boil and friends in Florida add rock lobster tails to theirs.

PREPARATION:
Fill a large steamer pot halfway with water. Add Old Bay Seasoning (or more to taste) and the garlic. Squeeze the juice out of several lemon halves and throw them in. Pour in the can of beer. If cooking indoor use medium to medium high.

When the seasoned water comes to a boil, add redskin potatoes and boil for 15 to 20 minutes (don’t let them get too tender yet). Then add the sausage. Boil for 5 minutes. Now add the corn and boil another 5 minutes (Begin timing immediately! Do not wait for it to boil again). If you’re cooking crab or lobster you’ll add them in at this time as well.

Now add the shrimp and any other seafood. Cook for 3 minutes. If you added clams you’ll know it’s done when they open up. Drain the liquid before serving.

SERVING:
The “proper” way to serve Frogmore Stew is to have a picnic table covered with craft paper. Newspaper will do but it can get pretty messy. Pour the stew out onto the covered table and enjoy the feast! Be sure to have plenty of butter, cocktail sauce, more lemons, and plenty of paper towels.

Now some folks (mostly in Charleston or Columbia) have been known to actually use plates at fancier occasions like weddings and baptisms but true Palmetto State residents treat the boil like a pig pickin’ and just grab what they want off the table. It’s easier to socialize that way.

One cooking tip is to use a turkey fryer with a basket to cook with. This makes it much easier to handle the food while the water drains back into the pot. Obviously this is only an outdoor method of cooking.

yum yum yum. I can't wait to eat this with your family again. I will copy this recipe to the cookbook!! :) THANKS!!

I am SO coming over for dinner