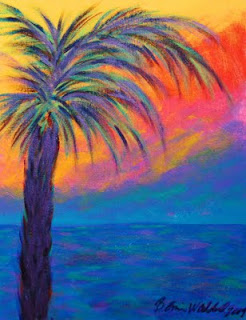 See that palm tree to your left? I love that palm tree! Even though I no longer have this particular painting of that palm tree I know where the real palm tree exists. It's in a warm place. In fact it is very warm where this symbol of summer time is planted.

The actual temperature at this very moment where this palm tree is located happens to be exactly 98.6 degrees. There are close to 3000 varieties of palm trees in the world and after nearly a quarter of a century of painting palms or palmettos a few new species have sprouted up within my summer-loving brain. This just happens to be the one I'd like to be sitting nearby this weekend.

Instead me and the family plus one are headed to Banner Elk, North Carolina. Because of my stubbornness and desire for the Waddells to have at least one "family gig" while doing something fun each year, the annual Woolly Worm Festival has sort of become that event.

Over the past four years we've endured some interesting weather. A little rain, a bit of cold temperatures, even some pea soup thick fog which is very possible at any time of the year in western North Carolina. But all in all the trip has been not only financially successful but a visual smorgasbord to our senses. Each October we predict the color splattered upon the mountainsides couldn't top the next. Each autumn we have been wrong.

Yet the 32nd annual Woolly Worm Festival offers a new experience: snow showers. Yep. High temperature for Saturday predicted to be 41 degrees (Fahrenheit for you not in the USA). 38 for Sunday. Whoopee.

Let me tell you that I used to be an avid snow-skier. In fact I got my first wife into it, so much so that her family still spends time in places like Utah and Norway (I think both might be states by now). Anyway, once I turned 40, skiing began dropping to the bottom of the list of "things I want to do with my daughter" faster than "let us collect boyfriends together." The fact is that I've turned into my dad. He HATED cold...HATED. The fact that he paid for ski trips each Christmas for about a decade still makes for a fun discussion each time my brothers and I get together.

For the record I think I have finally bought into my dad's idea of a good life. The kids and grand kids playing on the beach...me? Lying on a couch in an air-conditioned room sleeping. Bliss.

Instead I get to pay my dues this weekend. I have scarves, layers of clothes, and a really cool heater fueled by those Coleman bottles ready, willing, and able. I have two kids plus one wanting to race Woolly Worms which will sit idly on a string because it is so freaking COLD. I will finally have my family with me for the first time this year.

Have fun! Enjoy the cold. I wish it was cold here!