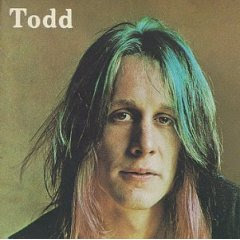 I've probably been a fan of Todd Rundgren longer than Liv Tyler has known that the singer from Aerosmith is actually her father and not The Hermit of Mink Hollow. At various times I've turned to his music as a source of inspiration, reflection, and renewal. The year of my first divorce I probably listened to his album Healing almost every waking moment, nearly wearing the vinyl out. It seems this is another one of those times.

Our regular readers have probably noticed that blog posts have been fewer and further between over the summer. It honestly wasn't intentional. In fact I wanted to include some entries from "the road" - perhaps even from the art shows. But an odd thing occurred along the way (and those that really, really know me would agree) - I found out I had nothing to say.

And for whatever the reason (and undoubtedly there are several) the melancholy...the blues...the sadness of the reality of our lives at the moment have peaked in such a way that it has become quite profound at least for me personally. The sudden lack of success at shows mid-summer; the juggling of whatever money we have available to us at the end of every month; the worry about how we will make ends meet come November through March; even having to pack up in the rain the previous 3 shows; all of it feels like anchors pulling me under stormy waves in a sea of despair.

It hasn't helped within the past week Jessie has started school (I'm not one of those parents - I honestly hate not having my princess around) and that Ben nearly pulled another episode like last Thanksgiving. I didn't decide to leave for the latest show in Banner Elk, NC until about 3 hours before I was due to arrive. Suffice it to say I didn't want to be there - my heart was here with my son and perhaps that was one of the reasons I had my first unsuccessful show there. Add in the ongoing nursing carousel our mismanaged provider has been operating lately and you have all the ingredients of a psychiatric meltdown...which is what seems to be happening to me over the past few days.

So in the words of another wonderful Rundgren song, can we still be friends? I need you dear Blogosphere. Our entire family needs you. And I apologize for keeping you in the dark about our life while I've brooded the last half of the summer away.

Over the next few days you will see some of the things I've been working on. I still find it ironic that even when things are darkest my paintings get even brighter and more colorful. And there some questions we will be asking in the coming weeks even a favor we'd like a church or non-profit to consider. Also look for the two Ben's to get back to work painting. We need that from each other.

Hello, it's me
I've thought about us for a long, long time
Maybe I think too much but something's wrong
There's something here that doesn't last too long
Maybe I shouldn't think of you as mine

:( I know how you feel--it's been hard for me to update Simon's site too.

CANNNOT NOT NOT WAIT to see the new work and the stuff you and Ben do...I've been missing it.