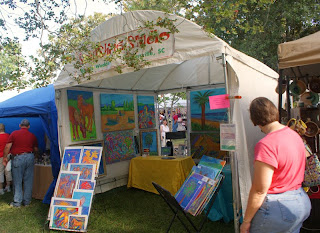 About this time last week Joan and I were sweating for a reason other than the typical late summer heat. Tropical Storm Hannah was nonchalantly meandering up the southeastern coast not really wanting to let anyone know what she was up to. Are you gonna develop back into a hurricane? Where is it you're gonna make landfall? More importantly for me, are you going to ruin what potentially could be my best show of the year? The bitch didn't really have all that much to say.

Wise Joan encouraged me to go ahead and prepare like I was 100 percent certain I would be leaving for Aiken, South Carolina the next day. So I painted, packed, and printed all day last Wednesday not knowing if the rug would be pulled from under me at the last minute. Meanwhile both of us were constantly monitoring any weather information we could find on the Al Gore-invented internet.

Now let me just add here that I have recently made one of the biggest bone-headed maneuvers since I began this little art business a couple of years ago. It all started with a phone call I received on the Friday afternoon of August 22nd. Glass artist Kathleen Hunt rang me up and inquired as to my plans for that evening. "Kathleen! What are you doing in Greenville?" was my reply.

"I'm not in Greenville. Me and Myron are on our way up to Banner Elk. We wanted to see what your were doing for dinner tonight."

"Kathleen, that show isn't until next weekend. It's always the last weekend of August." I really felt sorry for them having used all that gas just to have the wrong weekend. At least they could make it up the next week.

"No Bennie...I'm almost certain that it's this weekend. In fact Sue (the show director) called me earlier this week to remind me that we couldn't set up until after school was out." Thus the first realization that I just might have the dates wrong.

After scrambling to get child-care covered, get my van out of the shop early, and making a truly valient attempt to wash enough clothes to pack for the weekend I finally called Sue and surrendered. Turns out the show is always the third weekend of August rather than the last. To make the experience even more bitter to swallow the mountains of North Carolina had absolutely perfect weather the entire weekend: temperatures in the high 70s with no humidity.

So I left Greenville last Thursday morning with enough cash to gas up the van and make change for Friday's opening day. With just one not-so-good show in August which occurred over the first couple of days last month we were scraping the bottom of the barrel. And the forecast wasn't so hot for Aiken. Showers and breezy winds were likely through the weekend. 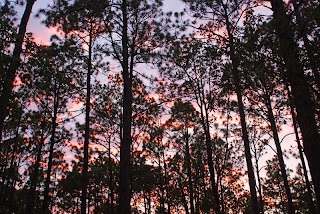 Friday's weather was decent to begin the day. Sales were typical - slow for the most part. Most folks were still finishing off their 40 hours working for The Man. Thankfully I made my expenses but not much more. The big story of the day was the notice passed out to all the vendors about mid-afternoon. Here are its exact words:

We have been in touch with the Aiken County Office of Emergency Management and have also been following Hurricane Hannah on The Weather Channel.

We have been informed that there is a potential for wind tonight with gusts up to 40 mph. Rain is forecasted for tonight and tomorrow (possibly 1-3 inches) with wind gusts in the morning of 15-25 mph. This information can change at any time as the storm has made several changes in direction and speed within the last 24 hours.

We suggest that you take whatever precautions you feel necessary to protest your belongings as this storm has the potential to impact the Aiken area this evening and early tomorrow morning.

Happy fricking birthday to me. I never counted but I'm guessing at least a dozen of the 163 vendors started packing up. In fact there were several no-shows probably due to the worries I had before leaving the previous day. While the skies darkened and became more threatening the rest of us milled around the rest of the afternoon trying to decide what to do. I wasn't concerned about my gear - my booth has been through far worse weather conditions - I was really bummed about losing The Money Day: Saturday at Aiken's Makin.'

I spent my birthday sulking by a campfire, sucking down Lubricant, and praying none of those 75' pine trees surrounding my camper landed on my bunk during the middle of the night. 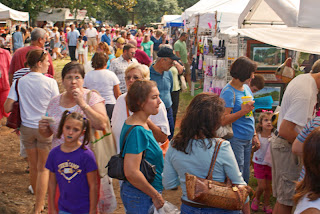 I actually woke up before my alarm went off. Thinking I could catch some extra Zs because of all that expected rain I planned to sleep in an extra hour or so (at there was one positive). However it is quite difficult to sleep in a tent on steroids (as we like to think of our little pop-up) when it is bright and sunny outside. Sure enough I pulled the curtain back to discover blue skies, dry ground, and a rising sun to the east. With all due respect to Warren Haynes, sometimes sunshine IS better than soul shine.

As you now know from my first post of the week I had the best selling show of the season (so far) on Saturday. I also had the best single day of sales in quite a long time and definitely of 2008 (again so far). To say the least that was one great birthday present from The Big Guy! We can now pay the bills for awhile as we look forward to my annual hometown show next weekend.

So let me repeat my thought from earlier this week: thanks a whole bunch Aiken, SC! Your community is awesome and I can't wait for next year. 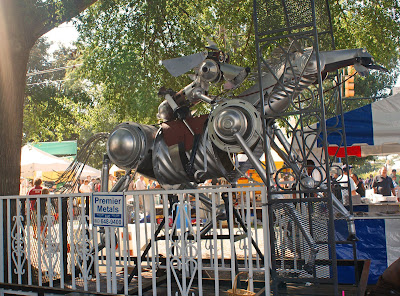 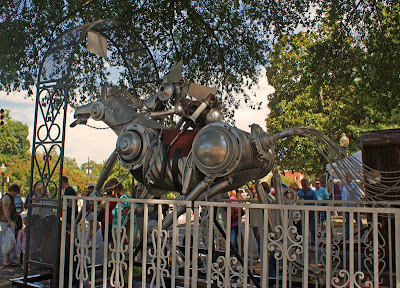 This was the centerpiece of the art festival. A local steel company commissioned a sculpture from a local artist. It's a life size depiction of a horse with a hound behind the reins. If you are unfamiliar with the area it is horse country to the max. In fact at least one if not several Kentucky Derby participants train in Aiken during the winter. The community also hosts national and even international thoroughbred races, steeple chases, fox & hound meets, polo matches, and of course dressage events.

Jesus, that was quite the saga! We were holding our breath up here in North Cackalacky, but thankfully all we got was some much needed rain. And that was done by Saturday morning.

Im thrilled you had a good show. If you are ever up in our neck of the woods for show let me and the Tapdancer know. We'll pop by and say howdee do.

I'm so glad the show was a success, in spite of the naysayers and ole Hannah! She sure didn't have much to say, and we wuz grateful!