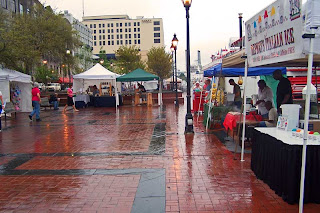 A Whole Lotta Shakin' Goin' On

My latest trip to Savannah was reasonably eventful to say the least. And actually I am very glad I went despite the amount of rain that descended upon us yesterday. I came away from the weekend with only positive vibes and a renewed sense that I am doing what I'm supposed to be doing at this point in my life.

The epiphanies in life usually occur while facing trauma, fear, and hardships but not necessarily in that order. Most of the time however you can just rearrange those words and still make that enlightenment work. Such was the case yesterday. Let me back up a few days.

From two posts ago you regular readers know that I was distraught over my negligence of some paper work that made me miss out on a chance to do a 3-day art festival in Savannah, Georgia the first weekend of May. Just to refresh your memory my friends with the Savannah Waterfront Association were going to discuss some possibilities with me over the weekend of gaining entry to the show. As Saturday approached the weather forecast for eastern Georgia worsened. Despite the rainy prospects Joan and I both agreed that I should go just to show my determination for wanting to enter the May show.

When I left town on Friday the chance of rain was around 60 percent. Upon arrival at my usual camping area that percentage had increased to 90. Severe thunderstorms were now added to the mix despite the fact that Friday night I ate dinner on the veranda of a local diner watching the sun set in grand fashion. Let me now add a plug for Driftaway Cafe. I highly recommend the Parmesan crusted grouper over grilled asparagus and red potatoes with the featured Cormel Road Chardonnay.

At 6 yesterday morning I was setting my tent up in light drizzle. The weather was obviously the talk among the vendors yet most of us elected to set up anyway. By 9:00 the drizzle had turned to a steady rain but those of us familiar with southeast coast weather noticed the change in wind direction about the same time. All morning winds had been blowing from the southwest pushing the ugly clouds in our direction. Now the winds were coming from ocean, in an east to west approach.

By 11:00 the sun had come out and by noon we had mostly blue skies above us. We could see storm clouds north and south of us so most of us vendors were obviously excited. Around this time I talked with the staff of the show. It was obvious that there was nothing they could do to get me in the early May show but they had even better news! This past Friday they signed a contract to manage the applications and jurying Savannah's Memorial Day weekend festival. Because the I've been juried already I will now be in Savannah that weekend! During those three days they fully expect to have three to four times as many visitors to the river walk than the first weekend of May.

So with unexpected sunshine, a few sales, and an even better art show in May I was one happy dude! Even with a few more showers expected later in the afternoon what could possibly bring me back to Earth? Funny how I use that "floating on air" analogy.

Around 2:30 Kenny, the assistant director came by to warn us that a nasty little thunderstorm was about 30 miles west of us and headed our way. He didn't think it was severe but wanted us to be prepared. Sure enough about 20 minutes later the bottom dropped out of the sky. for those of you who've ever spent time on the coast during hot weather you know what those "frog stranglers" are like. 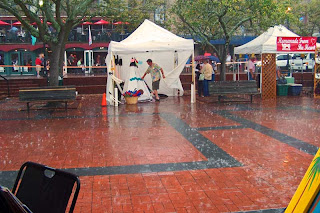 For the uninitiated the picture at the top was taken yesterday morning. The one to the right was taken in the middle of the monsoon. That is Ken who does some cool hand-made tepees for the young folks. Notice how the top corners of his E-Z Up are beginning to fill with water. It took the effort of both of us to push the water out of those pockets to keep the canopy from collapsing.

Early in my new career and after a handful of events on the coast I eventually invested about $850 in what is called a Trim-line Canopy. There are other variations on the market but essentially the framework is made of steel and the sides and tops are water-proof heavy plastic. There is no doubt that having my "big tent" saved the day for not only me but my two neighbors as well.

After the rain subsided I walked down toward the Hyatt (the big building in the top picture) to check on some of friends to make sure they survived the downpour. I noticed the skies were darkening but it wasn't until I was making my way back to my tent that I turned and looked back toward the Hyatt. The cloud canopy had turned a greenish black and it almost looked as if the sky was divided in half. The bottom half looked normal. The top half looked pure evil. I had seen this once before.

I started running back to my booth and began to yell almost uncontrollably "Get to safety! Now!" Vendors became frantic and once again began closing up their booths. I got back to my booth and told the two vendor booths next to me, three women in all, that we were probably going to see a funnel cloud drop at any moment. Sure enough the Coast Guard station blasted their siren almost as soon as I got the words out of my mouth.

Come back for Part 2 tomorrow.

eeeps! Rain isn't fun - wind ain't either...funnel clouds are a thing of the abyss...
Actually, Peter and I have been having the whole Crafthut vs. EasyUp discussion this evening, since we need a double booth - he wants to shop for another big tent, I want to save a few $$'s. But then again, this post kind of makes the point quite well - I'll let him win this one, maybe that will get me a decent stove in the new kitchen in exchange :)

Yikes! Did you guys get caught in a tornado? I'm on pins and needles!

Glad to hear you got another gig after missing out on the other one. Doggone paperwork!

Ooooh, I hope you got to see one. (It's ok to say that, because you're obviously safe) :)

What a cliffhanger. When will Part 2 be ready? ;-)

Way to leave us hanging, Bennie!