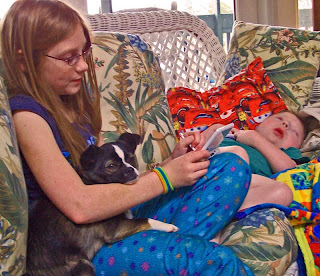 Early this morning I called Joan at her office. Before I could get a word in edge-wise she unloaded all the things that went wrong earlier in the day. She was behind schedule (typical but it still pisses her off), Jessie needed a doctors appointment (not really but it gave her an excuse to be late...again) so Jessie was with her, she had opened an envelope that revealed we had to fill out our family's medical history so we could retain Ben's Medicaid insurance and it had to be postmarked today so even though she's behind everything at her office and the world might now come to an end what in the hell was I calling her about.

Joan: "Crap. I hate that our roles are so reversed sometimes."

Fifteen years we've been married. It is amazing we are still together after all we've been through. I wanted to post a picture from our wedding day but we lack a scanner these days. Our wedding was awesome to say the least.

We were married in the entrance hall of my family's farm house. There were about 70 friends and family that joined us for the event and it was a dandy. I still can't watch the ceremony without shedding a tear (not because I regret it). My lady was beautiful and the princess of my life. She still is.

All I can offer you readers is a picture of the offspring of our love affair. Our children are the core of our existence. We couldn't and wouldn't have survived without them.

For the record, I love you Joan. Thank you for 15 wonderful years!

You are such a sweet,sentimental guy! I love it. Now, train Jim.

Happy Anniversary and God's blessings on your marriage for the next 60 years!!

Tell Joan that I would marry her in a heartbeat.....responsible taking care of details, etc. and she has a job. What more could a woman ask for!!! congratulations.....you all go have some fun well, at least joan will have the house to herself and she can relax. Christy

I can't believe I spent 13 hours in your house today and neither one of you said anything about it being your anniversary!!

happy anniversary!
get the scanner workin-i wanna see the picture!!

hope you two got your swurve on.
boom chica bow bow. *wigglin eyebrows*

what! isn't that what anniversaries are for??? *snort*

Happy Anniversary you two! It does seem like real life gets in the way of anniversary romance for a lot of us "lifers". Do something sweet for that wonderful woman!

Big hug to you both!