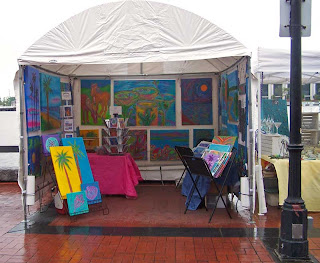 When I got back to my booth I found Terry, the lady next to me, frantically trying to get her side panels under control. The velocity of the wind was literally ripping them off her canopy. In a sense it was making her entire setup act like a huge sail. Because she's a glass artist Terry was about to see her entire product inventory wiped out while taking her neighbors' work with it if her booth became airborne.

So ignoring the eerie mass of clouds approaching us from just over the Hyatt, each of the four vendors grabbed a pair of tent legs. If you look at the photo I was standing just behind the street lamp, Terry held her other front post along with her neighbor's, while the other two ladies manned the back legs with their backsides against the railing separating us all from the Savannah River. By this time the rain was coming down so heavily that it was actually stinging my skin.

I looked back toward the Hyatt praying I wouldn't see a funnel cloud. In the mean time Terry and her two "helpers" were trying to get as much of her glass work off of her display tables just in case we had to abandon ship. About the time I heard Terry yell "clear" I saw the first "tentacle" drop from the clouds right over the hotel. Three more shortly followed. Despite the fact that my rain-soaked hair on the back of my neck was standing up I couldn't move nor could I take my eyes off what was now a tornado.

The tentacles were moving extremely fast but none of them had yet reached the ground. The wind got very intense. I turned to Terry and the other ladies and yelled "F*** this!" We all immediately took off for the restaurant across River Street (note to Duane C. - it was Huey's) Terry and I stood in the lobby watching the funnel clouds pass above us. We could see a few EZ-Ups toward the Hyatt start to lift off the ground followed by the sound of breaking glass. I remember thinking how in the heck would we be able fish our gear out of the river afterwards?

The dark cloud quickly move on without ever touching down anywhere near us. Seeing the skies brighten I returned to my booth to survey the damage. Besides a lot of wet paintings the only thing ruined was a stack of about 150 business cards. My neighbors fared even better. Up the block toward the hotel several about 8 tents took a good beating but most of the vendors' merchandise was recovered. Paying $150 for another canopy is much better than having to recreate months of inventory.

The only injury was to a jeweler who cut her ankle on one of her display cases that fell and shattered. With the rain holding steady all of us decided to close up shop. It was interesting because many times when rain or weather ruins the day for us crafters the overall mood is one of anger. Not this day. In fact the load-out was rather quiet and uneventful. I think all of us realized how we were very lucky, blessed, or both.

Just in case I misinterpreted what I saw Saturday, I picked up a copy of the Savannah Sunday paper. Sure enough on the front page of section C (go to the bottom of the page) was a short blurb about the funnel cloud that never touched down. I can honestly say without a shadow of a doubt that is one weather event I never want to experience again!

Awesome, I wish you'd have gotten some pictures. Sounds like all of you were very fortunate. Do the paintings survive being wet?

G - Even in the state of panic I was thinking I should be filming. I guess the fact that the funnel cloud(s) were coming straight at us kept me from looking around my booth for the camera.

About the paintings, since they are acrylic you just wipe them off with a towel and they're fine. In fact, to re-stretch a saggy canvas you just dampen the back. The rain probably did me a favor!

Glad to hear you all got out unscathed more or less - what a cliffhanger though...eeeps again!

Ha ha, I'm glad to hear you had the same thoughts--even though it sounded rude when I typed it out. Of course, ya gotta get safe!

Okay, now that is scary. I'm glad you guys survived unharmed. I never knew being an artist was such a hazardous occupation.

Well. I'm glad you are ok. Can you tell me why your stuff got wet? Did you leave the front of your tent open? Or was it closed and it leaked?

Peter - the front was open.