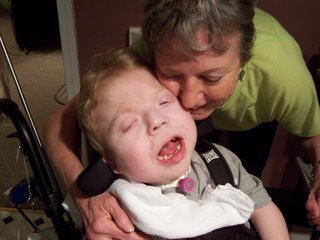 We'll now continue where we left off.

6. Ben can actually talk! This is mainly due to the use of a passy-muir valve that fits over the nose of Ben's trache although Ben has actually figured out how to clog his trachea airway in such a manner that allows him to use his voice. We prefer the valve method over Ben's method. Ben's way, even though it took a great deal of intelligence on his part to develop it, is a fairly gross effort on his part involving saliva and secretions (snot). The valve is really a simple little device that allows air intake but blocks air outflow. The air then has to travel upward over his vocal chords.

Although Ben has an extensive vocabulary most of what the untrained ear hears sounds like gibberish. We call it singing. Basically Ben's ability to understand language grew faster than his body's ability to duplicate it. That has been quite common over the course of Ben's life. So what we hear is Ben actually parroting a conversation. When it comes to actually deciphering his words I would compare it to translating the sounds of a deaf person. When Ben says "I love you" it sounds more like "ah low oooh."

7. Ben has a very difficult time using fine motor skills. Unfortunately we know exactly why. As I mentioned the other day, Ben has hyrdoceplalus. Once the shunt was in place and the fluid began to recede we got a clearer picture of his brain. It was already known that Ben had a lack of gray matter. According to the experts (neurologists...they're all idiots by the way) that fact was really no big deal. The BIG deal was Ben's lack of white matter. If you looked at a normal picture of the brain (some one's other than mine) the white matter would like like a full plate of spaghetti dumped equally around around the gray matter with a good bit of it centered between the left and right lobes, an area called the corpus callosum (quiz tomorrow!). Ben's picture would be the equivalent of a mostly eaten child's plate of spaghetti spread about his noggin with virtually nothing between the hemispheres.

It is this white matter that is the messenger service between the two hemispheres and to the rest of Ben's body. In fact Ben has had several EEGs (electro-encephalogram) because the neurologists (dumb asses) can't believe Ben is not in a constant seizure due to the pretty much non-existent corpus callosum. The EEGs have always been inconclusive and a pain in the ass although if you see pictures of them you would agree that Ben would've made a pretty cool Rastafarian.

8. Ben is susceptible to illness. If you review a little bit I can place the blame for this squarely on items 1 & 4. That hole-in-your-neck is an invitation to every virus, bacteria, or you-name-it to enter your body. Indeed it has kept Ben alive all this time but it has been a gateway for crud to enter his body. Add to the equation Ben's lack of muscle tone and his inability to expel the crud like we big people do and you have a recipe for extended sickness. Out of the six Christmas seasons he's been alive Ben has been in the hospital for three of them, including last year. For most folks the Holiday season is the most wonderful time of the year. For us it can be a living hell.
This will be the last of the "stuff" posted tonight. The final two items are drastically different than the previous eight. The last two will represent the best of Ben and the great hope we have for him! Isn't that a great invitation for you to keep checking back here each day?
Me-Ma shares a secret with Ben after dinner last night.

I'm so glad you found me! Ben is so beautiful. He shares a lot of similarities with my beautiful angel boy, Shalebug.

Raising these exceptional children is truly one of God's greatest graces.

I hope you dig about my site, you'll learn the hubs and I are on the road to adopting a child with exceptional needs, and that our son, who was so very special, gave us so very much.

I'm bookmarking you, and I will be back!