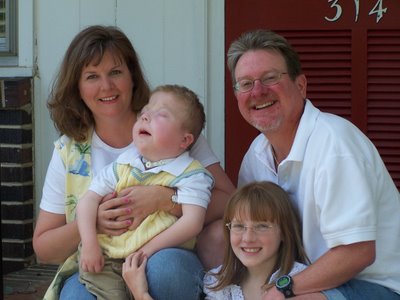 Summarizing Ben's Disorder
I honestly have no idea how to summarize Ben's genetic disorder which is scientifically called Tetrasomy 12p and typically known as Pallister-Killian Syndrome (PKS is what we call it). Georga sort of called me out on this one and I actually got to thinking about how little the readers of this site know about what it's like to live with Ben. There are obviously some links over on the side that can tell you some scientific blah-blah-blah, some really sad stories, and some really good ones as well.

In fact, Georga's request got me and Miz Wah thinking that she (Miz Wah) should start her own blog. This might actually take awhile seeing as she's like all tied up with work and stuff for awhile. Keep in mind she is the main bread-winner and can cook the heck out of bacon. If she wants a blog then by God she will set it up according to Miz Wah's Standards of Blogging (no need to read the cliff notes - it means "BenWah don't touch").

So here's some "stuff" about Ben. I'll kind of summarize and then you can either ask questions by "comments" or by e-mailing me. I won't post my e-mail here because I'd like for you to peruse our gift shop called "Art for Purchase" over there on the sidebar along side that scientific stuff. There you may find that perfect holiday gift for that special someone or for that finicky stupid witch sister-in-law that hates your guts. You will also find my e-mail by becoming a more discerning and educated shopper.

1. Ben has a hole in his neck that he breathes through. The procedure was called a tracheostomy. Essentially a plastic tube sticks into his throat just above the area where his upper rib cage makes that vee. This was done when Ben was about two months old. You can read more details over there at one of the side bar links but to this date no doctor has determined why Ben can't breathe normally. We change out that plastic tube at least once a day. If he's sick then it might be several times a day.

2. Ben has a feeding tube. He receives 100% of his nutrition through that tube. Most of you moms are probably familiar with the product Ben "eats". It's called Pediasure with Fiber. For some reason we've had the most success with the vanilla flavored version, therefore no one in this household can stomach being around anything vanilla flavored. Basically Ben has a little "button" on his belly that we connect tubes from a feeder to. This feeder automatically dispenses food throughout his day directly into his stomack. And yes, that would be another hole directly into his stomach.

3. We have a suction machine. Okay this part really grosses some folks out. Since Ben basically breathes mostly through that hole in his neck that is where the snot shows up. We haven't measured in quite awhile but we're still convinced that Ben set the all-time snot shoot record in Lowe's. We did warn the guy helping us to duck which led to the great distance Ben got in the effort.

4. Ben has low muscle tone. This means that if Ben's asleep his forty plus pounds seem like eighty if you have to move him. Basically this is why Ben can't walk or sit for very long on his own. Please know that it is not for a lack of trying on Ben's part. I'm going to keep this part short and sweet for now but this has been a key aspect of Ben's acheivements. Funny, I just now got a phone call from his former Occupational Therapist, Cheryl Laport. She was just checking on Ben. Because of some very aggressive therapy from Cheryl and Beth Teshon we are hopeful Ben will be able to walk one day.

5. Ben is a "waterhead." Yeah, I hate that term too. I think God is getting me back for using that terminology to describe some former classmates. Aren't we a cruel society? The real name is called hydrocephalus. This is what we actually saw in the early ultrasound that alerted everyone that something might be abnormal about Ben. Ben had an abnormal amount of fluid surrounding his brain and therefore had a device called a "shunt" placed in his body. The shunt takes the extra fluid from his cranium and deposits that fluid just outside of his stomach. Again, we are used to it but to those unaware of such devices the thought can be yuck. You can actually feel the valve fill up just behind Ben's right ear. It is the only way to know things are working right. Also it is very easy to trace the shunt tube to his stomach since it sits just below his skin.
Okay, enough of the appetizer. I'll add the next 5 soon enough. By the way, I want to say that I really am glad someone asked for more information. The description may be shallow or uncouth to some but I'd reply that you haven't lived in our shoes. Humor has and will be the only way we get through our ordeal.
I love my son probably more than any father could love their child. If you wanna compete then I accept the challenge. I feel the same for my daughter and wife but they are quick-witted and can defend themselves better than Ben.

an artist on the edge said...

Hi Bennie,
thanks for taking the time to explain a bit more about Ben's "giants he's up against" - he has some tough opponents there, but, from the pictures and your blog entries, i can tell he's standing firm and tall against them. GO BEN!!
For someone not dealing with this kind of challenge on a daily basis, it's so hard to imagine all the tears, fears, angers, happinesses and emotions that are brought to the surface through those struggles - so thank you for sharing so openly, it helps us "uninitiated" to understand better.
Thank you for sharing ben's smile - that made my day!
Please give him a kiss on the forehead for me - just a small prayer for a good day from me.:)