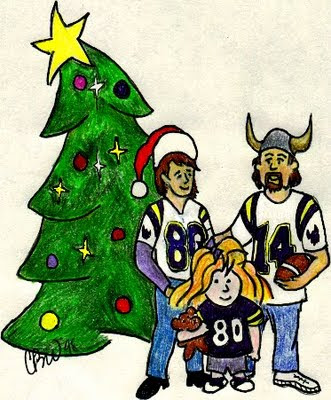 The last time the Minnesota Vikings had just one loss this late in the football season Jessie was just toddling and Ben wasn't even a glimmer in his Dad's eye. Before you non-sports-loving individuals leave to read a better written and more interesting blog let me implore you to stick around for a few more moments.

This was our Christmas card image back in 1998 when the Vikings went on a winning rampage. Early in 1999 they once again broke my heart by becoming the first 15-1 team to not reach the Super Bowl (much less win it). But during those wonderful months leading up to the playoffs, we were an excited family. Even Jessie got into the hoopla wearing her Chris Carter jersey every Sunday and putting up with Daddy "trying to make the TV mad" (of course it was the opposite but she was pretty smart just for suggesting it).

In 1998 Joan and I decided we'd mail out holiday cards with our own artwork - and she allowed me to come up with the theme. Little did we know that this would be our foray into professional printing and note card design. Believe it or not the finished product took a great deal of work. We took pictures of the three of us so I could develop caricatures. Those ended up being used to compose the pen and water color pencil image used above. Photoshop may have existed back then but we weren't aware of it nor could we afford it so no screw ups were allowed!

Card stock wasn't readily available either but we found some 8 1/2 x 11 paper that folded nicely into a roughly 4 x 6 envelope. The bottom line is that it worked. Even though most all of our friends follow other teams they enjoyed the humorous surprise.

I say all this for two reasons...okay maybe three. If you are of a young age and choosing a favorite sports team let me suggest some that you might want to steer clear of including the Vikes. Secondly I will unveil this year's SoulShine Christmas card collection tomorrow! We are all very proud of the artwork since one is almost exclusively Ben's. And thirdly, if you want a cartoonish caricature of you or your family for some artwork in the future then please get in touch with me! I'll be honest - it was one of the most fun art projects I've ever done!

Galleries: Art by Ben and Bennie, NaBloPoMo, Posts by Dad