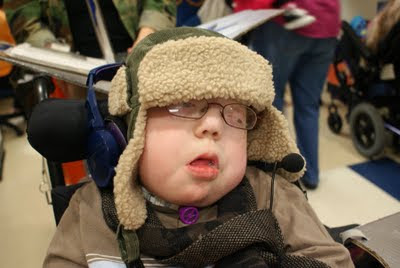 Today was the annual Boo in the School at the Washington Center. Each year the kids get to trick or treat around the hallways and enjoy a huge Halloween party just before they head home for the weekend. And each year at the party one student is chosen as having the Best Costume.

When Ben started attending his school we didn't make a big deal about Halloween. In fact I honestly don't recall if we even dressed him up for his first Washington Center All Hallows Eve experience. There was a good ominous reason for not liking this semi-holiday at that time which I will blog about later this weekend. But all that changed three years ago.

Ben's primary nurse in October 2007, Lisa Stamey, was bound and determined that Ben was going to win that Best Costume Award regardless of whether his parents participated in the fun (we didn't). After seeing the fabulous finished costume we knew that Lisa's design (created and built solely by her) would win by a landslide. We were wrong. Putting it bluntly, "We was robbed!" That year the judging took place before Ben arrived at school and even though we have to admit the winning entry was quite clever, Ben portraying Lightening McQueen was far superior (okay so maybe there's a tiny bit of bias on our part). Because of this monumental travesty of justice Ben's family and care-givers made a vow to avenge Lisa's loss! In fact we swore a sacred oath to hold onto that Best Costume Award as long as Ben attends the Washington Center!

So last Halloween Ben's two nurses, Vicki Robertson and Stacey Brophy, began scheming and planning weeks ahead. The costume had to be perfect - so perfect that the contest would be a smack-down of epic proportions; a weeping and gnashing of teeth sort of thing. Let's just say the gauntlet was dropped like Sumo wrestler falling out of a three story building. It wasn't even close.

Which brings us to today.

I'm not gloing to claim that my first attempt to defend our victory comes anywhere close to the previous two years. In fact my job was probably made much easier by last year's crushing landslide win. But like Lisa I was pretty much on my own until the very end. Thankfully Joan and Jessie came home from work & school respectively to help rescue me from my knotted mess of duct tape, cardboard, and Rustoleum paint. All in all it became a team effort including Ben's current nurse, Dee.

The result couldn't have been more pleasing! A happy Ben and another victory in the bag. So while I head up to McDonald's to share in Ben's award stash enjoy our ace Top Gun: Ben(nie) & the Jet! 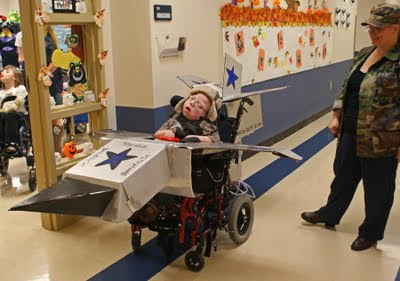 Dee checks out Ben as he taxis onto the runway. 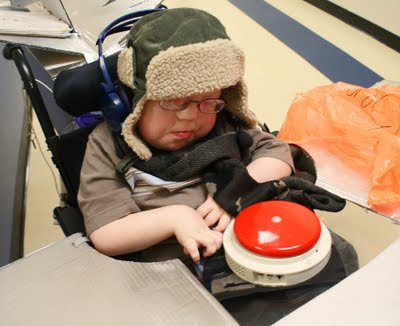 Our pilot goes through his pre-flight check making a special note not to read the blog from his laptop while flying. If you look closely you can see his headphones and microphone with which he keeps in touch with the tower. By the way, the red device front and center is called a Big Mac. It's a communication device for special needs kids. Basically you record a word or phrase and when the child presses the red button it plays it back. We recorded the intro of "Danger Zone," the Top Gun theme song. Evidently Ben liked it because he was way more interested in pressing that switch than trick or treating! 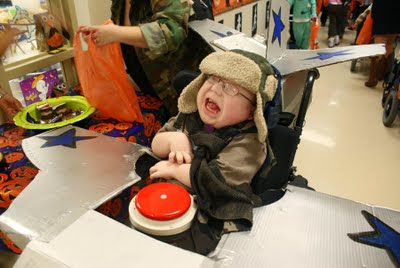 Nothing like jetting about your school too make someone laugh this much. 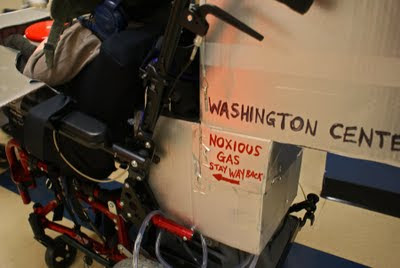 Bombs dropped from this aircraft can be quite lethal! 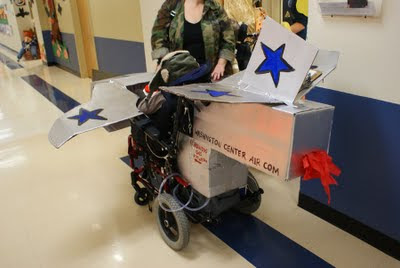 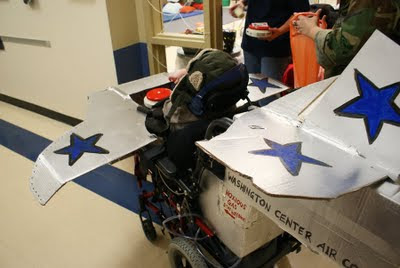 You can see Ben's right hand about to slam back down on the Big Mac. 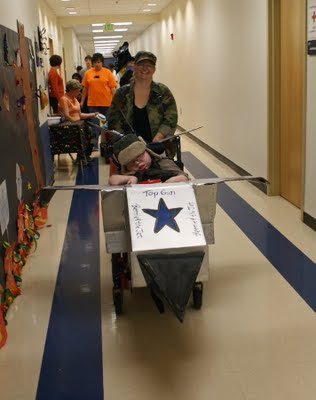 This Tom Cruise isn't into Scientology nor does he jump up and down on Oprah's couch. 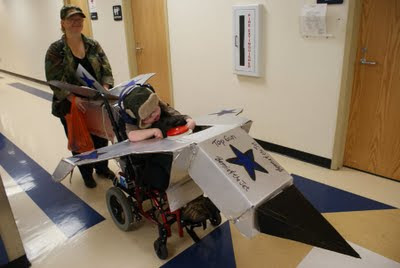 Note the second pic in a row of Ben staring at the Big Mac. We're a little tired of Kenny Loggins at the moment. 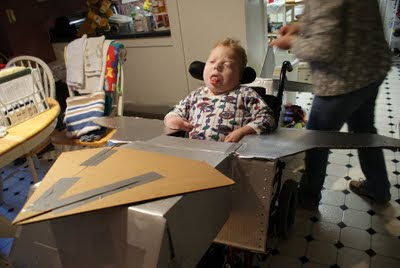 Construction last evening. We've reached the part where we try to figure out how in the heck do we attach this to his wheelchair. 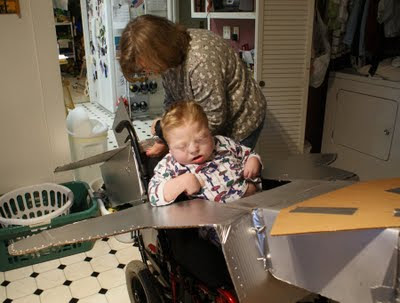 Ben was fascinated with the aluminum paint finish. 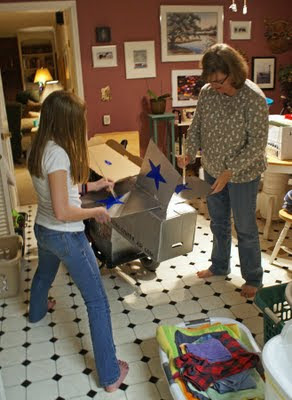 As I said it became a whole family effort. Jessie applies paint to the "decals."

Just like you to- always trying to keep up with us women!!!

You did a great job! You do our sex proud!

We award you the special stick!

He is such a doll, what a great costume

Nice article as for me. It would be great to read something more concerning this theme. Thanks for sharing that data.
Joan Stepsen
Hi tech pharma