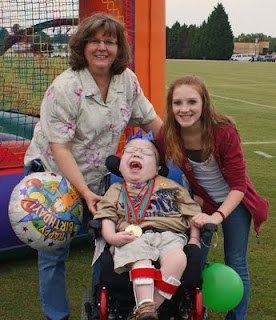 Looking back over the past few weeks I realized that I haven't really blogged too much about Ben. When that happens it's generally a good thing. That means things have been rather uneventful and Ben is healthy. At the moment those two assumptions are mostly true.

Ben finally got to attend therapy today for the first time in as couple of weeks...and it showed. He is usually excited and energetic when he attends. Today was different. Not only has the weather turned crappy here (cold and rainy) which he obviously feels but both his usual therapists were not in attendance. The biggest reaction came when his left hip dislocated which for the first time caused him a great deal of pain (more on that in a couple of weeks).

Also school attendance has been almost non-existent this month for two reasons: having a touch of the "sickies" and unreliable nursing. That situation is still a freaking circus and it is putting a strain on our relationship (me and Joan). We've made several suggestions that have met deaf ears (obviously) and I have had it! Enter our new ally.

This afternoon Joan and I got to sit down with Ben's new Service Coordinator. This person is the state represented head coach so to speak for all of our son's needs - the position requires an understanding of government services, where the funding comes from, what are the actual needs of the family, and how to achieve the almost impossible task of making all of those things work together. After spending two and a half hours with her (definitely a record for this type of meeting) Joan and I agree we have found a true diamond in the rough!

Because of the sensitivity of some things discussed I cannot tell you a great deal. What I can say is that Marie is obviously a God-send and our nursing situation shouldn't be an issue very much longer. Some things we thought never possible just might become possible. Even better is that the position she took working for our county has been an obvious transitional job. For our new friend and ally, she wants it to be a permanent position! Awesome stuff!

One last thought: I get very teary-eyed looking at the above photo. That is my family! My apologies to folks who think otherwise but I have the most wonderful wife and greatest kids in the world! The picture was taken on Ben's birthday which fell on Challenge Day. They were so very kind as to bring that joy to me later in the evening by visiting Hendersonville, NC where I was attending a crappy show.

May our smiles make yours broader!

They are beautiful- and despite your every efforts they think you are too! Love you-cb

You have a beautiful family!

Tell Jessie to STOP growing up so fast! She's gonna give her Internet Aunties a heart attack. LOL.