Happy Halloween
From Lightening "Ben" McQueen!
I sure do wish I could take credit for the costume but it was all nurse Lisa's idea, creation, painting, and assembly! She did an absolutely brilliant job! Ben obviously would've won best costume at his school had they not done the judging before he arrived this morning (like many others will say tonight, BOOOOO!)

It takes a special person to go into someone else's home every day to care and love on an exceptional child that isn't yours. Thanks Lisa for loving our son and allowing him to be like the other kids on this day of fun! By the way, this is the kind of stuff we've gotten used to out of Lisa. I sometimes think she's more of an advocate for Ben then me. 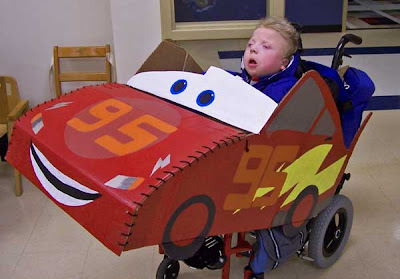 Ben looks around for Mater. 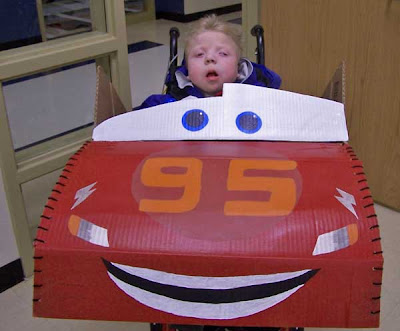 A big smile from Lightening! 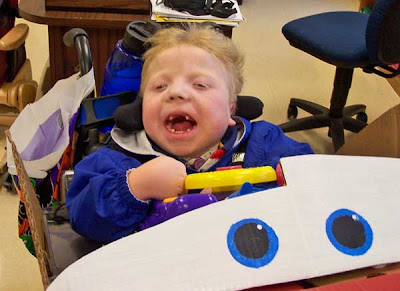 A big smile from Ben. 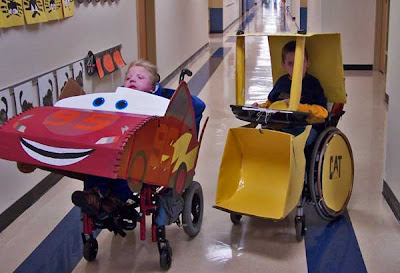 Ben and his buddy Sam show off their costumes. Sam won the competition.
I'll admit his was pretty good too. 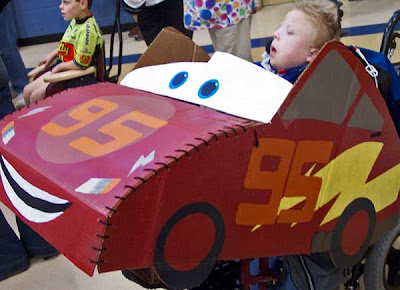 Burning rubber while trick or treating.

This is amazing!! Way to go--and the bulldozer is awesome too. Simon has been put to shame! HAPPY HALLOWEEN!

For the record, Ben is wearing a blue warm-up suit which looks much like one of those driver fire suits. This was a a well thought-out costume!

When he got home Ben wouldn't stop talking. In fact he's still gabbing in the den!

I'm sooo glad he liked it! He had more pictures taken today by teachers, administration, and parents then anyone else!

Sam's costume is even more awesome because she also turned his brother's chair into a rocket ship! Hats off to that woman for creating 2 costumes!!!!!!

I hope you all had a wonderful time trick-or-treating tonight!!!

that is the coolest costume i've seen today - and that after seeing hordes of kids come to the door at my mom's house...awesome!
i love the way Ben's hair seems to be blowing in the wind from the speed :o)
well done!
the bulldozer is pretty cool as well.

That's adorable, Ben! You wear it well...it really seems to suit you! I agree with the BOOOOOO... voting before you got to school. Poo. (Great job, Nurse Lisa!)

Awesome...and it looks like Ben is having the time of his life.

That Lisa must be a Godsend! :)

That's great that Ben enjoyed himself, and the fact that he was so talkative afterwards proves it. And that picture looks like he's winning. GO BEN!

That costume is adorable and so creative! Too bad they did the judging before Ben got there though, I'm sure he would have won ;) although Sam's costume was good too!!

Those are GREAT costumes!

Those ARE AWESOME!
Lisa sounds amazing, and I am not just saying that because I like her name.