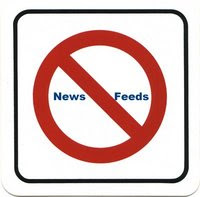 To Facebook or not to? It's a question of Shakespearean proportions with a resolution that only Ophelia might appreciate. Moi, deleting my Facebook account? It just might happen. I blame it on my friend Lynne. She's the one who got me thinking all Hamlet-like today.

You see we're sort of on opposite ends of the political spectrum. Lynne would say that I'm "liberal" while I would argue that I'm just realistic. I would call her "conservative" while she'd say she is just sensible. In reality I'd like to believe our bureaucratic clocks are just set to 10 and 2 which between the two of us are good times to share a Dr. Pepper and talk about life, love, camping, flaming thongs and whatnot. Most recently those conversations have revolved around more tragic themes like health-care, the economy, and the state of the nation. While dialogue is generally a good thing, Lynne and I have both recently noticed that whatever discussions popping up around many of our friends' status updates that involve politics have grown increasingly bitter and angry. And while those emotions aren't necessarily always bad the tendency toward violent reactions has definitely become quite disturbing. Now that genuinely is bad thing no matter how you analyze or interpret it.

I hand it to Lynne for being cool-headed enough to make a stand today. As much as I know how difficult it is for her she pledged to the best of her ability to refrain from initiating or responding or replying in any way, shape, or form to politcal discussions on Facebook. I snickered to myself.

But after a heated verbal exchange I was involved in this evening based on an article from (go ahead and laugh) the New York Post I'm no longer giggling under my breath. My dear friend has a valid point. In her words: "There is enough anger in the world, I don't need it in my life." Amen and amen.

The Facebook experience used to fun. I truly enjoyed catching up with old friends and keeping up with those I only get to see a few times a year. Getting to see pictures of children I have only heard about is still a real treat. Reading the quick blurbs of folks going about their daily lives can range from the remarkable to downright hilarious. That was the charm and hook of the original FB participation.

But some time within the past year things have changed and changed for the worse. Posts have increasingly become a cheer-leading opportunity for one's own political agenda. We can all blame some one or some thing. The economy, my guy got elected and yours didn't, the President will indoctrinate our kids, attend our Tea Party, no socialized health-care, and on and on and on.

Let's face it, by continuing to prop up our own religious politico beliefs in such a profound way on a website intended to build social communities we are actually doing the opposite of why joined in the first place. Ultimately we are alienating those that we love and care about because we are expressing things we probably wouldn't dare be chatting about were we sitting down with a cup of coffee trading the latest vacation pictures. Deep down we all have to realize that by plastering the latest media story on our pages only those that we already know have like beliefs are going to respond like we want them - you are not going to change those deep down heartfelt personal convictions of those that disagree with you. All you are realistically going to do is piss somebody off that you love and care about.

So I have taken my friend's pledge to heart and I am now vowing to to the same. I will try and do my best to refrain from responding to any political post from here on out. And I absolutely refuse to update my status with anything likewise because I really, really miss Lynne hijacking my inane threads.

Call us the Rosencrantz and Guildenstern of Facebook. We maybe unimportant in the large scheme of things but perhaps together we'll get a good message across regardless. And thanks Lynne for leading the way.

You're right, it takes away from the fun and social.

I hear you! I posted a bit of politico during the election, but quickly refrained afterward. I, too, have gotten very tired of the angry posts from people spouting their views. I'm taking the pledge too!

I'll cheer you on, but I cannot take the pledge - I know myself too well - I wont be able to resist a 'like' or a comment. You are right though that the last month has been REALLY contentious! I even alluded to realizing my own updates have been too political recently. Last night I contemplated starting another blog just for my political voice to be heard - because I know I do need to able to express myself that way.

I waver between feeling stifled (You cant talk politics in mixed company!) and realizing that while I and many others do know how to be respectful, too many others don't and yeah, why poke the rabid ones?

I only occasionally post political stuff on my page and usually I try to be non-partisan about it. One of the most infuriating things about FB is the constant stream of political debate and I try not to add to it. My mom (a staunch conservative) is constantly rounding our conversations into something political and it drives me nuts, I definitely don't want that experience from FB, too! Though, for things like the CHIP bill expansion in my state, I'll totally use my social media to get the word out.

I try not to comment on people's thread's when they are political. I just keep on reading because once you comment you are subjected to whatever everyone else thinks/feels and then I get even more pissy--I have found it's best to just ignore.

Hope you and the family are well.

Let's just hope that your ending is better than that of Rosencrantz and Guildenstern's!!!! Good for you, as in family dinners, politics and religion get one in trouble on Facebook ...

Hi... Looking ways to market your blog? try this: http://bit.ly/instantvisitors

I feel the exact same way.