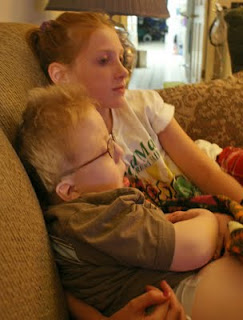 Once again an apology is due for the length between blog posts. The last three weeks have been incredibly busy! I've just completed the third of seven straight weekends of shows. The first two were absolutely fantastic - the third which took place here in my home town? Not so much. More about that later.

Ben has been fairly healthy for the most part. Most of his issues have been lung related due to the arrival of hay fever season. Although there are longer more difficult to pronounce names for his breathing problems it is simple enough to say Ben is asthmatic. So to combat the sniffles and sneezes we administer more nebulizer treatments.

Along with the seasonal allergy issues our nursing has been rather sporadic at times over the past month. that leaves me covering those days that we don't have someone to care for Ben...which cuts into my studio time...which ultimately puts me behind painting canvases. Fortunately my most despised nemesis at our nursing provider has left that agency while one of our most favorite care-givers in Ben's life has taken the position! Things are finally getting back to somewhat normal.

Both of our kids have returned to school. In fact Jessie has been back almost a month now and I have to say we are once again pleased with her work habits and attitude. This has paid off in her and a few more of her classmates getting the opportunity to take the ACT and SAT tests this year - in the seventh grade! I have no idea where she inherited her gift of learning from but we are just thrilled that she has it. As we like to say around here, "You go girl!"

So while I continue to dry out from this past weekend's show have as good a Monday as possible. I'll be back tomorrow to discuss how rain, fire ants, and art don't mix. Also look forward to reading about another amazing sibling duo, the son and daughter of a wonderful couple I know from college days. I promise it'll be worth your time to learn about Conner & Claire.

I just love that photo of them so much

Jessie is so very good to her brother. She just loves him and he returns the emotion.

Since I know how smart you are I'm very pleased.