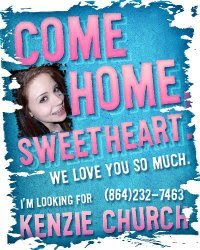 Interesting title that I chose. In a way it's a complete summary of my world view at the moment. My mental transmission seems to be stuck in one gear: park. The engine's running but it's just idling.

None of us keeping up with our friend's missing daughter has heard anything in two days now and that really bums me out. I don't think she is in any kind of perilous danger since she made the choice to run away with her boyfriend which is obviously unlike circumstances surrounding a kidnapped victim. But I can't imagine the selfishness of not contacting her parents. I've never met her mother but I have seen Geno (her father) and Kenzie interact before. In those brief moments I saw nothing unlike the love Jessie and I share. I could never imagine Jessie doing something like this to us. I just pray that Jessie continues to make the wisest of choices in her life. In that regard no news is good news.

Despite the urge to point my mouse to the CNN link on the toolbar every few minutes I'm disciplining myself to ignore it, at least occasionally. Call it an intentional choice to remain ignorant. If I'm not aware that the stock market has tanked another 500 points then I can hold the view that everything is cool in my own little world, right? I could actually have the potential of selling every painting and print at the Woolly Worm Festival this weekend. So once again, no news is good news.

Oh, by the way, Ben is recovering very nicely from his little bout with the crud. I gotta hand it to Joan. She can actually sense when Ben is starting to get sick. I mean it is really eerie sometimes. I wasn't around this past weekend when he started getting congested but I seen it happen before. Joan will just blurt out something like, "Ben's eyes don't look right" or "Ben's ears smell funny" or "that booger's the wrong color." The next thing I know we're sitting in the doctor's office with our kid running a fever of 102. So today I really have nothing to report other than I should be packing for our trip to Banner Elk tomorrow.

So I hope no news is good news for you too.

UPDATE: Kenzie has been found! Safe and sound finally.

UPDATE 2: If you want to see me in action at last week's show then check this out.

Glad the girl was found!

Women have some kind of sixth sense when it comes to the children.

They'd be rich if they'd just sell it.

Whew! Glad to hear Kenzie was found.
I completely hear you on the self imposed news black out; I;ve been trying to curb my CNN compulsion down to a dull roar, and as far as politics go, Im all "la la la la I can't hear you anymore".

Loved the video clip, it looked like you were having a pretty good time, and you're quite photogenic!

Great!! Is she home or just found?

Nice video too. Too bad they didn't drop your name ;) Should've done a little Kung-Fu!

Last I heard she was just found. That was early this morning. And yeah, everybody was kung fu fighting down there!

Soo glad they found her - nothing like a missing kid to bring out the heebie-jeeebies in a pair of parents...
Glad to hear Ben is doing better - Joan, Medicine Woman (see, now I shouldn't have said that, I bet...it's the german thing, I swear...) - and now there's this image of Joan with the bone in the nose thing going on.Sheesh - artists shouldn't be allowed to post here :o)

that's a relief!! Also, it's funny, but as a teacher, I can tell when a kid is getting sick. They are "just not themselves" as I like to say. By the end of the year, they say to me..."I'm not myself today, Mrs. Patrick."

Hope everyone is feeling better!!

i'm glad she was found and she's okay. still troublesome to know she ran away...but girls are crazy when it comes to boys i swear.

i loved the video! that is so cool. i didnt realize you used your fingers/hands to paint so much. pretty awesome.