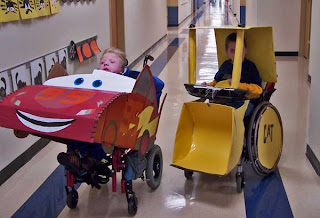 Actually, more precisely, it's on wheels. Remember last year's costume? Nurse Lisa constructed Lightening McQueen all by herself. We were certain Ben would get Best Costume at his school. Alas, Ben's bus arrived too late for the judging and the award went to his best buddy Sam (pictured on the right). Lisa gained a little satisfaction in that had they judged Ben the decision would've been very difficult.

Fast forward 365 days. We now know how clever Sam's dad and how fierce the competition! Nurses Vicki and Stacey have picked up that gauntlet and are determined to avenge Lisa's great effort from last Halloween. Cardboard has been folded, taped, and cut. Glue and paint have been flying about Ben's Suite so much that Vodka Mom would want to adopt both nurses as her teachers aides. Props are sorted and ready. The final touches have been applied. Certainly victory is within our grasp!

Sorry but you'll have to return here tomorrow to see the remarkable effort the ladies put forward this week. The only hint is that my fraternity brothers would be so proud (yeah, they're chomping at the bit to see pictures tomorrow night). Aside to my very young frat bro, Vance: This one's also for you!

I will however tell you about our first idea. Our plan was to build a cardboard box and paint it like the "Straight Talk Express." Since Ben's arms' range of motion resembles John McCain's the thinking was that we were headed in the right direction. Since Nurse Vicki wears her hair in a bun quite often she would play the part of Sarah Palin. A stuffed moose and various other props were located (sans a rifle - we wouldn't want Ben expelled under the no tolerance policy) including Ben's Big Mac which is a speech therapy device that records voices or music ("My friends, let me introduce to you Joe the Plumber.") We even had Bob the Builder "booked" to play Joe.

In the end we all decided that idea pushed the envelope just a little too far. So we thought up another costume idea that is a bit cuter and a little less political. Come back tomorrow to check out Ben's day of trick or treating at school. And here are a couple of bullets because I like them...

Also, I didn't get around to e-mailing you, but I'd be interested in a set of the Christmas cards. I tried to think of some other Christmas stuff you could do, but all I could think of was those snowman trays you made a few years with the Furman logo (or GSU logo for gsugt). How much would one of those cost (maybe I could get you to paint an NC State one for my Dad)?

Love the wheelchair decorations! They are fantastic!