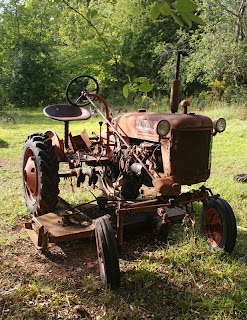 So you might be wondering about yesterday's stream of conscience post. It's really a simple explanation which comes from a mood that settles like fog around the time of my birthday every year since I turned 40. I'm guessing it was delayed this year because I was so busy preparing and then recovering from my trip to Aiken. Inevitably the ghosts from end of summers past came calling.

The two most recent photos are of a McCormick Farmall Cub tractor manufactured by International Harvester. It belongs to my next door neighbor and now resides inThe Accidental Junkyard. It is identical to the very same tractor we had on my family's farm. My guess is that if I attached a battery to it, filled up the tank, and located the crank bar (an L-shaped piece of metal that is inserted in a hole at the front of the engine) I could probably start the thing within five minutes.

Our farm (now a small subdivision) was located about a half mile from where I live now. That "row of trees" I mentioned yesterday runs along the back of my neighbors land. They are a mix of hardwoods and long-leaf pines that grew out of the fertile soil along Brushy Creek - the source of water for the cows and horses we once raised. That stand of trees for the most part still remains, running the 2 or so miles the creek parallels Pelham Road.

Me and my brothers all learned how to drive on that old Cub tractor. And indeed it was old. They were only built between 1947 and 1964 (the birth year of my middle brother Cameron). Because International Harvester didn't change the design very much through the years there's really no way of knowing just how old our tractor. We moved "to the country" in 1972 when I was nine into a house roughly built in the 1940s. Since the original owners of the home were considered "well-to-do" for their time my guess is that our Cub was possibly built in the late 40s or early 50s.

Ironically that tractor became a symbol of maturity for each of the Waddell brothers. The three of us couldn't wait for the day that Dad would come home from work, change from his business attire into a pair of shorts and a t-shirt, and then poke his head into our room and say, "Come here, son; I want to show you something." That moment was truly a coming of age. How to drive a stick shift (a task Jessie probably will never even understand). How to operate a piece of farm machinery safely. How to respect an older source of value and usefulness.

I took some photos of Mr. G's tractor yesterday. It's been put out to pasture now with the other vehicles and things residing in The Accidental Junkyard. Mr. G hasn't been around much lately - in fact I found out today that his wife of many, many years passed away recently. One of his sons cuts the 5 acres now using a new-fangled modern wide-decked whatnot. As I wandered about the mechanical graveyard I had some pity for the vehicles that had passed away back in the 70s and 80s. Not the Cub. If just for a brief moment we snickered together knowing that one day someone new would saddle up and take my old friend for a spin. I hope it's me.

Baby, I feel your seasonal blues - I've got a case of my own, see?

I loved reading this! I definitely think you should get that old tractor out of the Accidental Junkyard and give her a whirl, if only for the sweet memories she would bring.

There is a definite comfort in remembering; bittersweet, but comforting none the less.

what a great memory!

i love that old tractor. i've been on the lookout for something such as that to photograph. very cool indeed.

i'd love to find a old tractor/car cemetery like that somewhere. how fun!

excellent post. it made me think of a few things:

- Farmall tractor square-dancing! old tractors are used for a square dance - heard about it yesterday on CBC Radio Canada.

- 2 months ago I posted a photo of a Case tractor, along with a note re a trip I took on it that was actually death-defying, and was asked to write my story about it for a magazine.

- by retelling the story I send chills down my own spine. your memories are a bit happier.