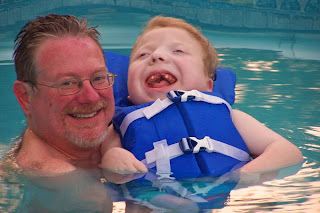 Those smiles are hiding a bit of nervousness though. Tomorrow morning is our trip to Charlotte which might be the beginning stages of Ben living without a trache. If all goes well we'll have updated positive information about Ben's airway, lungs, esophagus, ears, and nasal cavities.

Ben will be put to sleep. Afterwards Doctors Parsons and Matthews will take a good long look at everything involved with Ben's breathing. More than likely Ben will come out of the procedure with a brand new type of trache kit (he currently uses a Shiley) until everyone feels comfortable with him using his own God-given equipment. While we are excited putting a neurologically abnormal child under general anesthesia is always tricky which makes us nervous.

Ben has had a wonderful day since his Me-Ma and two cousins from Tennessee have been by to visit. We think this is a good sign because we're convinced he knows something big is about to happen. It's not that often Jessie leaves for an overnight trip so early in the day.

Even though it has been at least 2 and half years since anything this invasive been done on our son Joan and I have fallen back on the old habits to get "our game faces on." She's been furiously cleaning the house. I went to grab a beer a few minutes ago and I saw her brandishing a toothbrush while cleaning some cabinet doors. I sat and watched Jessie, Amelia, and Ella swim until the afternoon showers came so now I'm searching for something else mindless to do. Even though I need to work on some paintings my concentration just isn't there and it won't be until after tomorrow.

The procedure is scheduled for noon EDT tomorrow. Send some good thoughts our way; even better, say a prayer. Monday will be a long day. Hopefully it'll bring a new beginning for us.

Update: Monday 1:30 PM. I'm using a computer in the outpatient waiting room. Is has been a long day already and he's still in the OR (an hour & a half now). So far, so good we've been told. Ben was a trooper as well although he about broke our hearts before going back. When he saw Dr. Parsons in his scrubs he looked back & forth between his parents shaking his "no." He knew exactly what was about to happen. Thanks for the kind thoughts and words.

Update 2: Monday 9:20 PM. Carolinas Regional is only an hour & a half away but we just got home. that should tell you a lot. This day has been much longer and disappointing than anticipated. Ben is fine for the most part. He's pissed off and sore but happy to be far away from a hospital. I will provide more details tomorrow after some much needed rest. Again thanks for keeping us in your thoughts and prayers.

Dear Lord, be with our little brother Ben tomorrow during his procedure. Give your eternal peace to Bennie and Joan. And guide Dr Parsons' and Dr Matthews' hands with your own Great Physician's hands. Amen

i'm like joan-i clean when i get nervous and anxious.

prayers are on their way up (or wherever heaven is...) - exciting things always make me queazy, and I can only imagine the emotions in your house today. I'll be thinking of you all tomorrow, but especially Ben boy. Hug him for me.
Keep us updated on what's happening!

oh geez. i just read the update...totally a heart breaking moment that's for sure.

it was about 1130 today and i remembered your family and said a prayer. i hope it all went well.

Awwwww guys! I'm sorry it's been so long and disappointing. I hope you get good rest tonight, and I'll be checking in tomorrow.

Oh babe - you are all in my thoughts and prayers today.

At least the house is clean, right?! It's comforting to me to know I'm not the only one who does that.

Kiss that sweet boy for me!