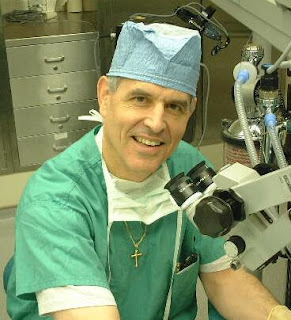 Long time readers will obviously think the title refers to Ben. And even though Ben's remarkable life has been one miracle after another, there have many many others along the way that have used their talents to keep our son healthy and alive. One of those individuals is Dr. David Parsons.

As a pediatric ear, nose, & throat specialist Dr. Parsons has been one of our son's primary physicians since Ben's lengthy stay in the NICU. By performing a tracheotomy on Ben at two months of age, David is a huge if not the sole reason Ben survived those early months.

The good doctor has been able to insert tubes in Ben's ears when others said it couldn't be done. He reconstructed Ben's airway so that in all likelihood Ben will eventually be able to breath without the trache. And through the years he's kept a sharp eye on Ben's lung and nasal issues via numerous bronchoscopies using medical equipment he invented.

If you haven't clicked on the provided link above to Dr. Parson's biography this would be a good time to do so. Colonel Parson's is also a Vietnam veteran and ace fighter pilot. The accolades earned by this gentleman are extraordinary and yet he is as humble and friendly as a lamb. He and I made a wonderful connection early on when we discovered our love of playing guitar.

With all of that said the Greenville community sadly said goodbye to him about 2 & a half years ago when he "retired" and moved to Charlotte to be closer to his children. Although Ben has had adequate EN&T care since it just hasn't been the same without one of Ben's "original team members." It has actually felt like a part of our family moved away.

To make a long story short, Ben had a regularly scheduled visit to his pulmonologist recently. We were thrilled to discover that Dr. Parsons was practicing once again and had an office in South Carolina! Dr. Jane Gwynn is referring many of her most vulnerable patients to him.

Me, Joan, and Ben made the trek up to Rock Hill, South Carolina today for a terrific reunion. Tomorrow I will share some of the concerns we've been having about Ben and our plan of action Dr. Parson is taking within the next few weeks. In the meantime I'd like for you to visit Dr. Parson's ministry website. That will tell you even more amazing information about him and how he is making our world a better place! Ben is my hero but David Parsons is right up there with him.

Josh and I joke that if KayTar's pediatrician ever moves, we're following her. Except, I'm not really sure we're joking! Some doctors are just miracle workers and that's how we feel about her, too.

Glad you are reunited and he's got a plan!!

I just got to take a look at Dr Parson's site... man, is he a hero or what?!?!? I am very excited that you guys get to have him see Ben again and am looking forward to hearing what he finds out. I'd also like to learn more about the trach he was telling you about - the tracho? I googled it but didn't get good results. Let me know if he gave you any websites to visit.
Thanks
Vickie

My goodness Bennie how uplifting it was to read about Dr Parsons and his missions.
thank you for sharing his story.