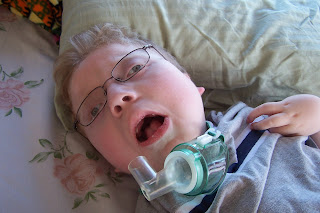 Sometime in the coming few weeks we'll be carrying Ben back to see Dr. Parsons. Ever since the initial tracheotomy the goal has been to eventually remove it. Over the past two or three years Ben has increasingly shown an ability to breath through his mouth and nose.

One of our main concerns is a fairly new one. The photo to to your left doesn't quite do it justice but the bone growth of Ben's nose is moving toward his right side. Oddly that is also the direction that his severe case of scoliosis has taken. Evidently we can chalk up another of his anomalies to the lack of white matter in his brain.

The slant is now so evident that Ben looks like a boxer whose had his nose broken and never had it reset. Ironically breaking his nose could very well be one of the options we have to choose from to remedy the situation. Our hope is that we don't have to go that far. Regardless Ben will be going under anesthesia in the near future which is not something we look forward to but we have the greatest trust in Dr. Parson's care for our child.

Essentially the good doctor will be looking down his airway to his lungs via his mouth. He'll also take a good long look into his ears and of course his nasal passage. If everything goes well then we might finally achieve that ultimate goal.

The really humorous part of all of this is the memory of Parsons breaking the news to us in the NICU that Ben would have to be trached. At the time Joan and I were devastated. We couldn't even imagine having to care for a child with a hole in his neck. Nowadays we can't imagine Ben living without that hole in his neck! As Dr. Parsons told his nurse yesterday, we're preparing to take away Mom and Dad's security blanket. I'm thinking I might just have to revert back to thumb-sucking.

achieving the final goal as you say sounds wonderful yet scary.

geez. i dont know. very emotional. i'd be happy but very afraid of the surgery, etc.

of course i'll be praying....i always do.

exhiliarating, yet somehow worrysome stuff - but being the trooper he is, I'm sure he's going to surprise everybody around him again, just you wait and see.
Miss you all!

Yeah, I think I would need a security blanket...

I think I felt the same way about Julia's gtube and now I would be terrified to take it out. It is a security blanket. Eat! or Else!

I remember our ENT describing with such care the anaesthesia and scope that was going to be performed on Julia. All we can hope is to have such caring professionals take care of our kids.
Still I will keep my fingers crossed and you all in my prayers.

thanks for the tips on referrals - it is mostly 'barbie' and 'fisher price outlet'!