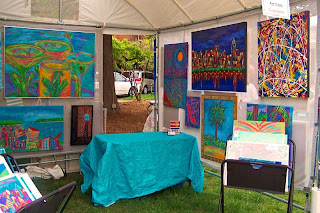 Saturday in the Park

It wasn't the 4th of July but it sure had all of the images the old Chicago song mentioned. In fact I would say that the First Annual Larkin's on the River Carolina Festival was a rousing success if you asked me or my booth partner, Pat Cato. Not only did we have a blast but we made some decent money to boot! You can't ask for anything better from a first time event.

The threat of rain probably held the crowd to a lower expectation even though we felt only a few drops in the morning hours. By the time we tore down yesterday the clouds had parted leaving sunny bright blue skies. It ended up being a perfect spring afternoon.

Evidently Pat and I were the only artists having success. I think that speaks volumes about our passion for our respective art styles and our senses of humor. We knew we'd make a good team, we just didn't know how well. I guess when you are having fun doing what you do others begin to feed off of it.

Despite a few "birth pangs" I plan on being at the festival again next year. As artists we were treated very well and we expect this festival to become even better in the coming years. Plus it was really nice to do a show and then sleep in my own bed last night! 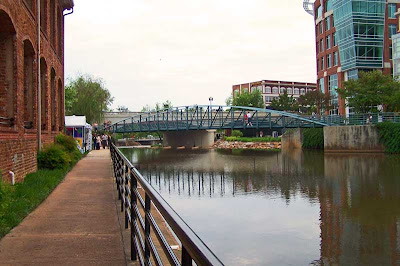 This photo is looking south on the Reedy River. The concrete structure behind the walking bridge is Main Street. Our booth is partially visible on the left. 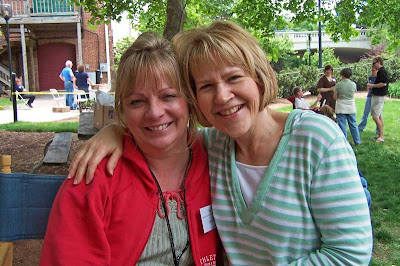 The best part of the day was the surprise visit by artist friend and peer Pat Kilburg (on the right). Back in the fall when I was a member of a local gallery I referred to the two Pats as my "homies." I sure do miss working Wednesday mornings with PatK! PatC is on the left. Both are true inspirations to me, not only as artists but as people you want to be like. 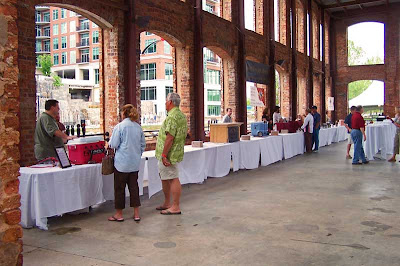 Local breweries and wineries brought wonderful beverages to share with the patrons. This is the interior of the Hartness Pavilion which is essentially the exterior shell of an old textile mill. The old textile mills are an architectural influence on Greenville's landscape. A century ago , the mill villages were so competitive that they produced many superb athletes including Greenville native "Shoeless" Joe Jackson who made the big leagues playing baseball. 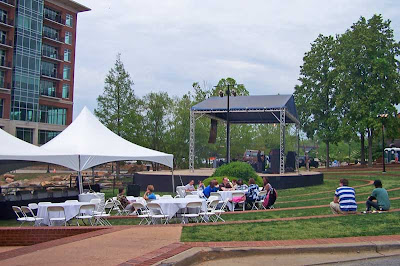 This is a view of the amphitheater on the Peace Center grounds. The Roger C. Peace Center for the Performing Arts is the centerpiece of Greenville's revitalization efforts. Our city has gained so much notoriety for our renaissance that city leaders from across the nation and even international communities regularly visit us.

good to hear this first one went well. it looks beautiful there. you dont see places like that here. bummer.

i hope this is the start of good season for you!

Looks awesome! What's that swirly painting in the first picture? It looks neat.

That is one of Pat Cato's pieces. She's a big fan of Jackson Pollock.