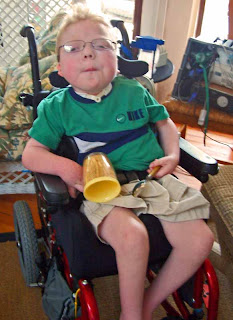 It happened early this morning in Charlotte, North Carolina. His staff almost wouldn't let us in. Even though we were on time too many folks in his entourage were just getting started for the day.

An assistant met us at the door leading to the elevator that would take us to his suite. Having climbed the steps to gain entry to his place, Joan and Jessie were already there. I pushed Ben through the hallway admiring the incredibly artistic photos on the wall. This was so very cool!

We finally met the guy and he was way more down to Earth than we had expected. He took time to talk with Jessie about being a big sister to Ben and then took some more time to meet Ben. Things couldn't have gone any better!

As we looked around his place Joan and I were thinking he must be doing well. His office is one of the coolest we'd ever been in and we were impressed with his demeanor. Even though he was quiet and had interesting observations, the guy was downright friendly and warm. Meeting a doctor for the first time can be an interesting experience.

Wait. You thought we meant THE Dave Matthews? Nah, man! We met with Dr. David Matthews who will team up with Dr. Parsons next month when Ben gets all of his airways checked out. He's the plastic surgeon who will recommend some possibilities to free Ben from his trache.

The good doctor took the comparison in stride though. He'd obviously heard it before and even has a couple of t-shirts to prove it. A long story short we are even more excited about our next visit to Charlotte next month.

It was definitely a long day that started around 5 AM this morning. After the visit with Dr. Matthews at 8:30 this morning we then had an appointment at the Carolinas Medical Center for a pre-op appointment. That wasn't until 12:00. Thank goodness we arrived early.

All in all things went rather well. I told Joan and Jessie how proud I was to be a part of a family that was creative enough to actually "enjoy" the experience. It's not quite a vacation day but we had fun together. Seriously. I guess we were all punchy because the wisecracks were flying and there were more laughs than there should've been.

The weird part though was Ben. He knew exactly where he was: someplace he didn't want to be. But Ben is such an amazingly courageous kid. He played "possum" for most of the day until a pretty nurse came in to talk with us. After that he was just like his daddy - talking incessantly.

Anyway, I find it interesting that a trip to Charlotte for some boring appointments will find it's way etched upon my memory. I guess that's how life is. The days that don't seem to matter are the ones that become most important.

I'm glad it went well and you guys were able to make it enjoyable!

Sounds like an excellent day, even without any autographs. I think it's very cool that you guys can enjoy time spent together, wherever it is or whatever you're doing.

That's awesome news! I'm glad Ben's appts all went well, and can't wait to hear what they have planned for him.

You had me going about 'the' Dave Matthews.
I think the Doc should be much more famous.

Is it just me or is Ben looking a lot like you in that photo?