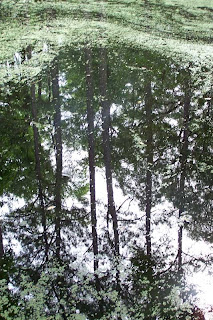 Several days ago I titled a post "The Fading Stain on the South." By assigning a title as such I'm insinuating that the southern part of the United States is truly a place of beauty and yet still has a ways to go to achieve the purest of cultures. There is work yet to be done but we have come a long way in a short period of time.

It is unfortunate and ironic at times how "Hollywood" or the media generally portrays us. For the most part we're still portrayed as racist good old boys sitting in our double-wide trailer drinking Budweiser wearing white tank tops as we watch the NASCAR race while rooting for Dale Junior. That is about as accurate as considering all Italians Mafiosos, all Chinese as short, and all blondes dumb.

I happen to know an Italian couple who can't cook worth a shit. The Chinese just might medal in basketball while hosting this year's Olympics. And two of my sister-in-laws are blonde. One is an engineer and the other is...well...blonde. If I accused them of being dumb they would defiantly rout me at Scrabble and then kick my ass.

In reality the South has been much more accepting of others than cinema wants to credit us for. The facts are obvious that we've embraced every culture to step foot on our soil. That is what makes cities like New Orleans, Savannah, Memphis, Charleston (SC), Nashville, Asheville, Biloxi, and hundreds of other locales across our region so interesting, entertaining, and a pleasant place to visit! We are the birthplace of "modern" music: blues, jazz, and ultimately rock & roll. Throw in barbecue, Zydeco, whiskey distilleries, architecture, year-round-fishing, almost year-round-hunting, and east coast wineries...well I'd have to say the Garden of Eden relocated here from the Middle East.

As I have said I embrace everything about our Southern culture. It's unfortunate that some of it is disappearing but there are plenty of places one can still experience heaven on Earth. So here is the top ten reasons why I love living in the South:

1. The food. Oh my God! I'm hoping The Big Guy Upstairs has a Southern cook in heaven 'cause it doesn't get any better than here. So many cultures have blended that it's difficult to know whose responsible for what. The basics of grits and sausage gravy are enough to begin with. Add in the seafood that is so very prevalent down here and we have feast potential. Our vegetables are always to die for, particularly those grown in the backyard. If you didn't put out a garden this year the neighbors should have plenty.

2. The warmth. Off the top of my head I can only think of three snow events in my lifetime that made kids miss more than 2 days of school. Having a Christmas Day wearing shorts is rare but it does happen. Yet it is still cold enough that we see all four seasons and they all last their three month allowance. Count on it!

3. The music. As already mentioned, pick a genre. Go ahead. I dare ya'. Other than classical you'll never find another area of the world that has more variety. Rock, Jazz, Blues, Bluegrass, Country, R&B, etc. It all started with the combination of gospel, jazz, black blues, combining "bluegrass instruments" found in the Appalachian mountains. We are THE source of modern music.

4. The People. I'll admit it. We are some strange folks at times but we sure are friendly! For the most part the South is still pretty much rural. As long as you are away from places like Atlanta, Charlotte, or Birmingham you are very safe in asking for help from a neighbor if you run into car trouble. Neighbors are still neighbors. We still look out for one another and will do so until time stands still.

5. The Location. This in particular is a prop for my hometown: Greenville, SC. We are three hours from the coast and about 45 minutes below the mountains. We have incredible food choices and a growing arts scene. My town is definitely a place to visit if you're headed southbound and I wasn't paid to say that either. Most southern cities are within a day's drive to the shore and less than that to the mountains.

6. The Weird. This description is gonna end up being a post in the next few days. I found a hilarious book recently that details some Carolina weird at its best. I'll just leave this one alone for the time being. Let's just say that the heat can take its toll.

9. The Cost of Living. This is a no-brainer. As I type this the average cost of a gallon of gas is over $4.00. I haven't seen any gas station (yes, we still call 'em that) selling unleaded for more than $3.87. Housing is still affordable even in the larger cities. Of course we feel the pinch of the economic conditions but we are better off than our industrialized neighbors up north and west of us.

10. Arts & Crafts. Again the diversity leads to a melting pot of wonderful ideas and creations. As an acrylic painter I'm always checking out my peers' works. The diversity is truly unbelievable. Black-smithing, painting, mixed-media, and pottery...all mediums have a unique quality to them. Those same cultures influencing music have thankfully infiltrated our art.

There you go. My own "Song of the South." I love it and will always remain here. I pray that when Jessie chooses her path in life that she will continue to embrace the goodness of The South.

in my heaven there's sweet tea, sweet potatoes with cinnamon and lots of buttah, (not but-ter, buttah) there's bbq, there's fried chicken, mashed potatoes and gravy, there's old ladies in the kitchen servin' it up on school lunch trays. yeah..and the desserts? hello...yeah. heaven is the south for good cookin' my friend.

i love the south. i love the heat. i love the people. (i think its all the sweet tea y'all drink makin' ya sooooo nice) i love the smells down there-orange blossoms. mmmm.

Looking forward to much of this when we visit! ESP. SEAFOOD! YUM!