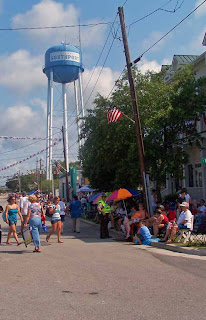 I gotta say that the city of Southport, North Carolina can't be taken to task for false advertising. If you Google the name one of the first things you'll read about is that it is home to "North Carolina's July 4th Festival" as in there isn't another one like it. I can now certainly vouch for it. There really isn't any other like it.

As I was leaving town Friday evening there had to have been at least ten miles of vehicles lined up bumper to bumper trying to enter the two lane road into town. I had already witnessed many folks parking just outside the city limits and then walking the three miles to the waterfront. Even with the bad economy the area was filled with thousands of families still wanting to celebrate the Independence Day.

Which leads me to my only complaint about the week - or more precisely the weekend. The next time the 4th falls on Friday let the arts festival remain open on Saturday. We really missed out on a great weekend of sales by having to close on Friday. The upside is that we'll be set up for some great shows the next three or four years. 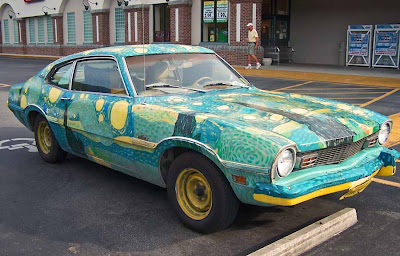 I spotted this terrific 1970s model Dodge Maverick in a parking lot while picking up groceries after setting up on Tuesday. I found out that it belongs to the local high art teacher and I hear she's a hoot! Obviously it is titled "Starry Night." 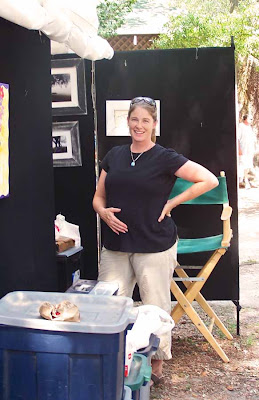 This is Rebecca Duffy and a little one to be named later. Long-time readers will remember that I blogged a little about Rebecca and her family last April. Tim is doing most of the shows right now for obvious reasons. It was really great catching up with them! 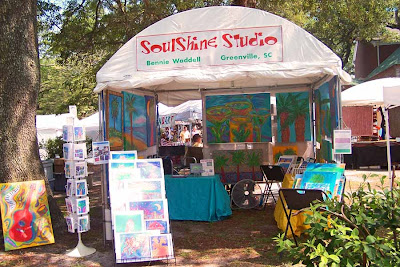 The was the first show that I got to sport my new booth sign which includes the new "logo." 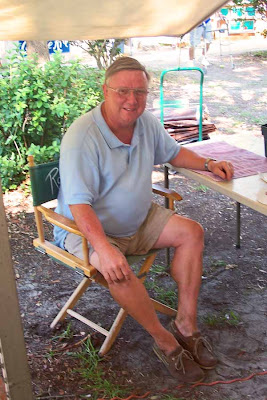 I met Ron Williams at my first out-of-town art festival back in 2004. As mentioned in my previous post Ron has become somewhat of a mentor to me, teaching me about the ins and outs of traveling as an artist. Here, he is modeling some of that "black dirt" he told me about. 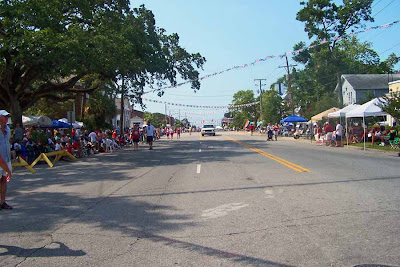 This is looking east, just in front of the park we were set up in. If you look closely you can see a hint of the Cape Fear Sound beyond the white truck. Also note the sidewalks filled with folks anticipating the parade. I snapped this around 9:15 Friday morning - almost two hours before the two-hour parade began. People were staking out their spots as early as seven that morning so I am told. The best line of the weekend came from my buddy Peter Steidle (you'll hear more about him in a couple of weeks after my trip to Banner Elk). He evidently watched the first hour of the parade and as he passed by me around noon I asked him how it was. His reply?
"Man, I'm Shrinered out!"

i love your new sign! How was this show (besides the dirt)? Successful I hope!!

I'm glad you and Ben had a nice bachelor weekend. I'm glad to be home for a few weeks and getting caught up on 100's of things :)

I also love the sign! Way too cool!!! Glad you had a good weekend, sorry you didn't get to catch those Friday/Saturday sales.

hope you had a good weekend!

i love your booth. it's so bright and inviting!

Man! I hate I missed you! I'm not sorry I missed that crowd though! I've never heard of the "black dirt" you described, though I wouldn't doubt it - eastern North Carolina has many mucky, yucky charms they don't mention on the pamphlets.

I love the new logo! It's big and bold and full of style! The booth looked great - very open and colorful - it begs you to come on in!

It's actually turning into a great show even after the fact. I'll be shipping a painting to Ohio over the next few days. And yes, the weather couldn't have been better. No rain, temps in the mid-80s. That is rare this time of year at the coast!