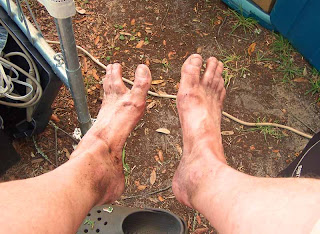 Did you miss me? I missed you. It is nice to be home blogging after a long hot week in Southport, North Carolina. There is plenty of blog fodder to tell y'all about from the previous seven days and I will get into it very soon but there is one thing I do want to warn you about if you ever visit the area: black dirt. It's everywhere. Particularly in the very arid dry hot sweaty little park where my booth was set up for four days last week.

Evidently that black dirt is a wonderful place to plant things such as grass, flowers, vegetables, oak trees, pine trees, palm trees, fruit trees, shady trees, breezy trees, honey bees, weeds, all kinds of flora and fauna, vineyard vines, street signs, neon signs, water towers, electrical powers, houses, homes, condos, and plenty of commercial establishments wanting to sell you a tee-shirt with the name of the aforementioned commercial establishment. What isn't so wonderful to plant in that black dirt is a very white canopy full of handmade arts and crafts.

To be honest I was warned. Ronald Williams, a local watercolorist from the area and who I consider a mentor as a traveling professional artist, told be about "the dirt." Acrylic painters Rebecca Duffy and her husband Tim Bush who also are local residents mentioned "the dirt." Jeweler Randy Armstrong who has done the show for about a dozen years one time told me that Southport was the dirtiest show on the face of the planet and that included Detroit's The Dirty Show.

My response was that it couldn't be any worse than sandy Chapin Park in Myrtle Beach or the dusty Aiken's Makin'. I was wrong. I now know why North Carolina is known as the "tarheel state." Seriously.

By the time I crammed the last of my gear into the van Friday evening I could've been mistaken for my own shadow. I'm serious. I've either showered or bathed four times since I arrived back at the camper Friday and that black dirt is still showing up around the drain. I'm not lying here. I showed Jessie my shirt and shorts I wore Friday just before I dropped them into the wash and it grossed her out. Do you know how difficult it is to gross out an eleven-year-old?

Our wonderful friend and fellow artist Christy Buchanan was in town today to drop off her daughter at South Carolina's Governors School for the Arts so she stopped by to visit with us. I opened up the back of my van to show her one of my new paintings. She wanted to know when I started using so much black paint in my work. Honey, that ain't black "paint."

Southport, Oak Island, and the rest of southeastern North Carolina, I love ya'! I adore the sand, the shore, the food, the hospitality and the kindness. The black dirt? Not so much. I'm just hoping I'll have all that dirt cleaned off my paintings and gear by next Independence Day.

So until I feel a little less less dirty about talking about this past week's show here are a few bullets for your entertainment or whatnot:

About the photo: those are my feet. I took that shot around 11:30 AM on Wednesday - about an hour & a half after we had opened. And yes, it got worse.

Fractured testicle?! Wow. I can't even imagine how bad that hurt the guy.