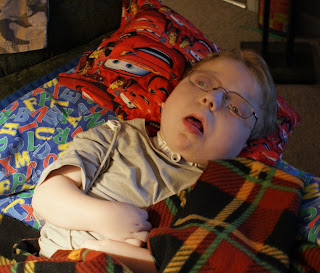 And right on time as usual. Just when I blog about it The Kid jump-starts his motor and away he goes. Honestly we weren't expecting him to make so much progress as quickly as he did.

Ben's sleep has been interrupted the past few nights by intermittent seizures. So he's been sleeping later into the mornings than he usually does and yesterday morning was no different. I was a little bummed out because we had scheduled his therapies for noon - he's obviously missed the past couple of weeks due to the recovery from our Charlotte visit.

Ben was sound asleep when we left the house. Nurse Stacey and I decided we were going to take him regardless even if all we could accomplish was some stretching. As it turns out we got to meet his new speech therapist and that may have been the trigger to turn "the switch" back on. Ben was chatting away as we filled in some blanks for Barbara, the new ST. In fact she was quite impressed given the information found within the past few weeks.

After a few minutes, Dawn the occupational therapist popped in to let us know she was ready. I thought Ben was going to fall out of his seat trying to follow her out the door (literally I had to catch him)! We were soon introduced to a new physical therapist named Mark who will be working with us over the next few weeks. Ben has always reacted differently for male care-givers than female and yesterday was no exception. Stacey and I just dropped our jaws at just how well Ben participated! We still can't believe it. 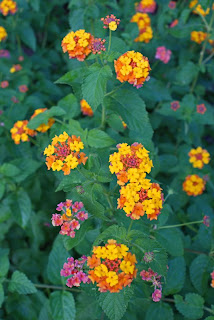 Stacey warned Ben that he'd be in the stander today. Even though he once again slept late (more early morning seizures) he was all smiles once his day got going. Before we got him into the stander we discussed that we'd at least take it easy on him. Yeah right! Ben was already into the second hour (a new personal best) when we took him out. Our boy had worked hard too. In fact we could feel the sweat under his shirt. I told him he was rewarded with a well deserved nap.

A few minutes later I was greeted with one of those smiles only a PKS child can make. I walked in to see Ben reaching up for a hug from daddy. As of this moment he's yet to take a nap and I can still hear him hammering away on his set of musical chimes.

This is not an uncommon occurrence for our son after he's been hospitalized or traumatized. Sometimes the wait has been a month. A couple of times it was two months. But every time he somehow snaps out of his doldrums, depression, or whatever else you want to call it on his timetable and his terms. 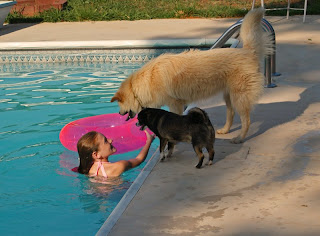 As you can see I've had some time to fiddle with the new camera. Let's just say I have a lot of reading and study ahead of me. I'm just glad I didn't have to waste all that money I used to spend developing some really bad photographs.

There is a world of difference between 35mm SLR cameras and digital SLRs. Plus I need to brush up on my f-stops, aperture setting, and lighting situations. Evidently I've gotten lazy while letting Kodak take care of all that for me.

By the way, I will be around this weekend. Hendersonville is just 45 minutes up the road so other than tomorrow evening, I'll be making the trek home each night. So look for a post Saturday night with hopefully some good news.

Hip Hip Hooray! What an awesome post--love that he was feeling so good!!!!
I forgot to tell you good luck this weekend.

Glad to hear Ben is feeling better. It's funny how sometimes they let us know just how much they look forward to those therapy sessions, even though they have to work really hard. Happy news.

hope all this greatness and productive "behavior" carries over into your weekend.

best of luck to ya. and have fun with that camera!

Glad Ben is back! Woohoo!

We're still waiting on KayTar to make it back to 100%.