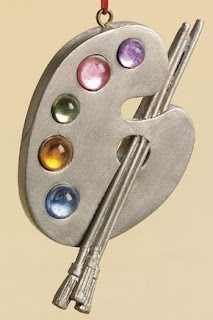 On the Palette...
Christmas Time is Here

Hunter Green: Just like the arrival of colder weather, gray skies, and the jolly fat guy in the sleigh we welcome the 2007 holiday virus. We started Ben's "sick plan" yesterday afternoon which mainly involves increased nebulizer treatments. It's the same cold that has made Joan and Jessie miserable for about two weeks now.

I have to say that Ben certainly is much stronger than in years past. In the brief time it took me to complete that first paragraph I had to walk downstairs three times to suction Ben's trache. All three times he had already cleared the phlegm. If we can control the coughing and which will allow him to rest we won't be so worried.

It is so funny how much he wants my attention until he feels rotten. He's literally clung to Joan since she got home from work Friday night. According to his mother, typical little man.

Mulberry: Injury report (for the football fans). This Sunday I'm listed as "probable." This is quite an accomplishment for me since I injured my back last Sunday. At the end of last weekend I was on the "doubtful" list.

Although I've had a sore aching back in the past I've never had it do what it did a week ago today. After cleaning our den and kitchen I was returning a few items to the kids' rooms when it felt like a small claw reached up from behind me, grabbed just above my hip bone, and then try to yank me to my knees. No lie, it literally brought tears to my eyes. I know some of you have to have had a similar experience. Two or three days of not being able to sit, stand, sleep, or even breath without severe pain.

As it it turns out once again having an exceptional child had its benefit. I took the advice of Ben's physical therapist Thursday at his appointment and the results have been dramatic! If you get a chance to read this before our next visit, thanks Jessica!

Cranberry Red: Despite Ben's cold we've had a great family weekend. Friday night Jessie spent the night with my mother. Joan and I stayed up until almost four in the morning watching movies. The weird thing was that we felt like teenagers on a date. We didn't even have to fight sleep....until Jessie called yesterday morning around 10. Then we felt old again.

Today is cooking day. Me and Jessie are starting preparation of our Christmas Eve turkey dinner with my mom. She'll fly our Christmas morning and be in Baton Rouge in time to watch our Cajun niece and nephew open their gifts. Fun stuff, people. Fun stuff!

We hope you are enjoying time with your family as well this weekend. Greet everybody warmly, hug your loved ones, and relax in the warmth of joy and peace.

don't burn the bird :) - and have a beautiful christmas with your beautiful family! Give Ben a hug from me, I hope he feels a LOT better REAL soon. We miss you guys!
btw - I did my first "giving up, packing up and leaving early" art gig last week in Boone. And, we got to put a new transmission in the Honda for all the trouble, to boot. Oh, yeah, and as a bonus I brought home a wonderful case of bronchitis/half pneumonia to share with everybody. Ah well, that just means better times ahead...

Have a merry, whacky and slightly intoxicated christmas - give the kiddos a hug!

Duuuuude, Merry Christmas to you, Ben, and the rest of the fam!

Merry Christmas. We started Rodney's sick plan yesterday, too. He scared me major when his sats dropped. I had baby Kristian in the bath and my mom was visiting. So, real overwhelmed. .. that's an understatement.

I have just been catching up! I haven't seen a child in the last two weeks that was NOT sick, including my own!!! All over kids are on sick plans and some who didn't have sick plans have them now. I have giving all the kids pep talks that go something like this: "OK we know that you kids like to get sick and go visit your PICU nurses for the holidays, but we would really not like Santa to have to come visit you in the hospital this year. So let's work together and GET BETTER!!!" So Ben, there's yours. NO PICU!!!!
Hugs and kisses.
Vickie

Hope it was a good one.