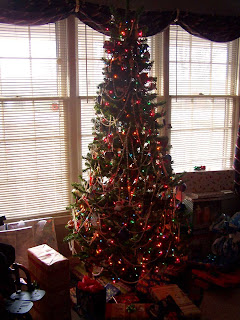 Christmas All Wrapped Up

Actually we follow our Anglican tradition of celebrating Christmas up until the Epiphany (January 5th). For the most part the presents have been distributed and opened but for us that is not what the holiday is about. And despite all of us including Ben having a nasty cold this has been the most enjoyable Noel since our son arrived into this world.

In a sense the past few days have represented a new birth for me, Joan, Jessie, and Ben. The aches, coughing, runny noses, and endless doses of Motrin haven't robbed us of our joy. On the contrary, we've been reluctant to venture out much because of the cold symptoms and have instead spent a great deal of family time together! And oh what fun we've had.

I spent most of Christmas Eve cooking while Ben watched and encouraged me the whole time. We both had so much fun interacting with one another. Ben got to smell and taste the foods as we prepared the feast. He even helped crush up some cornbread for our dressing!

So despite a good deal of napping in between activities Ben honestly participated more this year than ever. And I can see Jessie maturing into a young lady as she displays manners, humor, and interaction with others in ways that her peers do not. That is a blessing and curse at the same time.

I am also convinced The First Day of Christmas ended with another visit from an angel or a loved one. Joan thinks it was my father. I just know that seeing it occur in a lighted room it was not a seizure. Enjoy the following memories of the last two days... 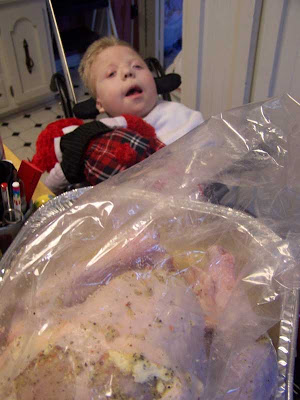 Ben inspects the turkey before we put Tom in the oven. 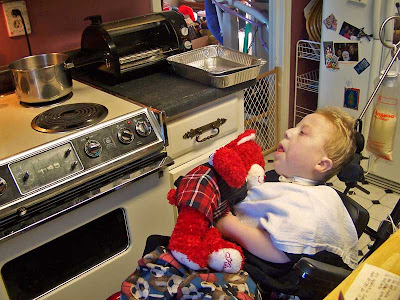 Later in the afternoon Ben is checking to make sure water doesn't boil over the edge of a pot. 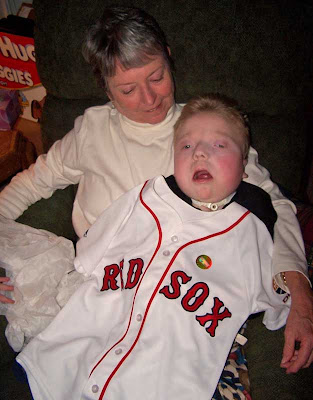 Me-Ma surprised Ben with a real Boston Red Sox jersey - not a replica - the 2007 World Series version! Above Average Joe and Rubenesque Writer will be jealous! 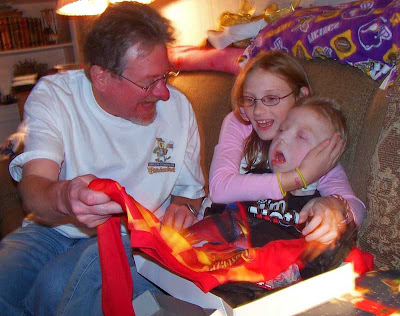 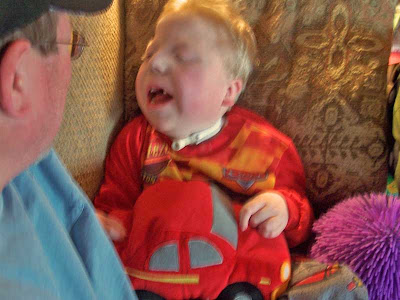 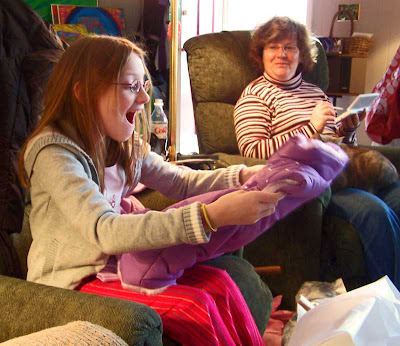 Jessie is thrilled with her gift from Aunt Sheri. She always is.
My Cajun sister-in-law knows fashion. 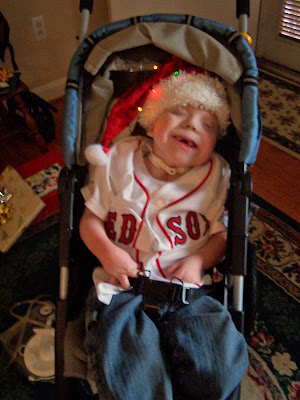 Ben shows off his blinking Santa hat and his new jersey for his other grandmother. 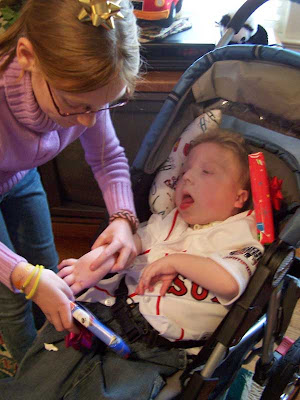 Ben pretty much only allows Jessie to help him open his gifts. Seriously.

awww.
i love the photo of jessie holding ben in her arms showing him his new pj's. love that picture.

she is such a precious little girl.

and ben, well geez...what can ya say about that little guy that hasn't been said a thousand times? okay i'll say it again...just a joy. an absolute joy. i love that he watched you cook that turkey cause ya just never know. i stuff my turkey before i put in the oven too, and i have always been told not to do it that way, but i don't listen. as it appears you don't either. i kind of took you for a deep fried turkey kind of guy...especially in the south..where you can grill out for winter. [you suck]

yeah so. good to hear you had a good day and i'm hoping y'all are feelin' better. if not, you just keep that stuff down your way--ya hear?

Your kids are just so sweet, Bennie. Glad it was a good day.

And I hope that your visitor was Jakie, telling Ben all about running along the beach.

I'm glad you guys had a great time. The kids look so happy. Merry Christmas.

Tell Ben that my sister got me a Red Sox Mrs. Potato Head! You're completely correct in assuming that I would be jealous. I'm COMPLETELY jealous. I love the pic of Ben in the jersey and the blinking Santa hat. Too cute!

Go Red Sox!!!! (from my dear husband, Arthur). Looks like you had a wonderful Christmas! Happy New Year!

Thanks everyone! Ben slept a good part of the day today (we heard him "talking" during the night) but he seems to be gaining his strength back tonight. We are so thankful that his strength is so much better these days. Just a few years ago this type of thing would've landed him in the hospital.

His nurses, Lisa and Stacey, are great folks. They have wonderful advice and care for our son just like a child of their own.