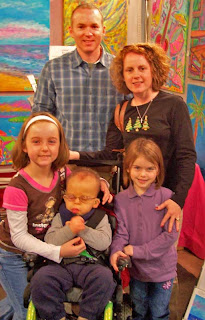 Face 2 Face With Another PKS Family

I will never regret traveling to a disappointing art show Thanksgiving weekend 2007. As always I learned more about the business of selling art (like checking to make sure the most popular pop star isn't scheduled to play the venue where I'm working), I met even more talented artists and crafters who confirmed my opinion once again that we're one big family on the road, and for the first time I came face to face with another family whose youngest child has Pallister Killian Syndrome! My fellow blogging friends and readers meet the Bergquist family.

To be honest the meeting was not unexpected. Dawn Bergquist is the Board Chairperson of PKS Kids Network which is the not-so-new non-profit organization raising funds for and awareness about Pallister Killian Syndrome. Our families share a common thread in that our sons both have Tetrasomy 12p, the genetic mutation known as PKS.

Dawn and her husband Eric are both originally from the Greensboro area. A few months ago she sent me an e-mail telling me they would be returning home for the Thanksgiving holiday and would come by to see me. Their visit to the booth Friday morning thrilled me!

This was the very first time that someone from our family has met another PKS family, let alone another PKS child. Despite the fact that we had never met each other we had a true (and way too brief) reunion. It was as if we had shared family from many past generations. The art show disappeared behind them as I met Aiden and his sisters for the first time. Beforehand I was nervous knowing that I would be meeting them. That all was wiped away in an instant when we shared hugs, kisses, and wondrous tales of our families.

Just like Ben, Aiden is a very handsome young man! His smile and mannerisms are magnetic. He and Ben have so much in common they could and probably should be brothers. His sisters are so beautiful and mature for their ages just like Jessie. They doted and fawned all over him which their love for him so obvious! Too say the least I was completely blown away.

Aiden has a shunt and a repaired cleft pallet just like Ben. He was talking and full of energy despite the fact that others couldn't understand him. He had the same chubby cheeks and fatty little fingers! He is a very happy little boy and fully aware of the love that surrounds him.

One of the things that I found most interesting was that his favorite color is red, just like Ben! I asked Dawn about it and it is something we will revisit when we spend our vacation next June in Philadelphia with all of the other PKS Kids families.

Before they left we all posed for pictures. As often the case with Ben, as soon as the cameras came out Aiden "shut down." This was another common custom our sons share. They play "possum" once the cameras come out.

I missed them as soon as they said farewell. In fact it hurt to say goodbye and have to wait seven and a half months to see them again. The PKS Face2Face Conference is now written in pen on our calendar. Joan and I now know that our family needs to be there so that our son can meet Aiden, Simon, Jake, Lauren, and other children he can identify with. What a true blessing that made me a thankful father the day after Thanksgiving! 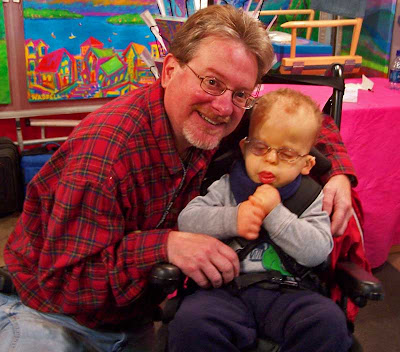 Yay! You got to meet my favorite people! The Bergquists are amazing! You will leave Philly changed for having bonded with all the great families. I CANNOT WAIT and especially now, knowing I will meet You and BEN and Joan and Jessie. Ohhh, I can't wait. You better prep Ben for all the love and hugs.
P.S. Simon likes red too--must be a good color for their eyes to see.

What a CUTIE! I'm jealous all of you guys get to get together!

On another note, do you think their eyes are sensitive to the flash? It is something I never would have thought of, but sometimes KayTar makes it quite clear that her eyes are too sensitive for photos, as evidences by the 200 or so photos I have of her with her little eyes totally squenched (not a word, but I like it anyway) shut. LOL. Just an idea.