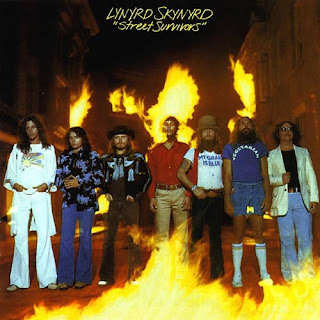 An important Southern anniversary passed unnoticed this past weekend. Perhaps my bad day Saturday at the Woolly Worm shindig was God’s attempt to get my attention; to pay homage, reverence, and respect to the dearly departed. October 20, 1977 was one of the most unholy of days ever to occur below the Mason-Dixon Line. Thirty years have now passed and yet the scar that cuts a swath from Greenville, South Carolina to Baton Rouge, Louisiana still remains.

October 19, 1977 was a celebration in Greenville, SC. A concert was held inside a structure that is now reduced to vacant lot. The Greenville Memorial Auditorium, affectionately known as The Big Brown Box, hosted a legendary performance of a group of musicians who changed the way folks all over the world viewed the civil rights battleground of the 1960s. This was a band whose music heroes were black; whose music for the most part was recorded in the racially diverse community of Muscle Shoals, Alabama; who still embraced a multi-cultural Southland while promoting the good things of the Old South. Things like sitting on the front porch sipping sweet iced tea on a hot summer day, black men and white men working blue-collar jobs in the fields and then sharing a cold beer after a long days work, and making folks aware of this beautiful landscape that is disappearing. Their biggest hit disparaged the racist governor, George Wallace, for his bigotry.

I was there for the final concert. Yes, there is a reunited band with different personnel but it’ll never be the same. Three days after the release of Street Survivors and one day after the concert the plane carrying Lynyrd Skynyrd crashed in a Mississippi swamp. Lead singer Ronnie Van Zandt, lead guitarist Steve Gaines, and Steve’s backing sister Cassie all perished.

I intended for this post to be a bit tongue in cheek but that is quite impossible because of the esteem still held for the band and the folklore that still surrounds them. Despite their predecessors, The Allman Brothers, Skynyrd is still considered the founders of Southern Rock. That was a term I hated while pursuing a career in music during the 80s. I considered their music as redneck, back woods, and essentially tripe while embracing heavy metal and British power bands from their era. It was not until my short-lived recording and performing career allowed me encounters with some of those musicians I “respected” that I began to understand Skynyrd’s place in rock and roll history.

A few years ago one of my music buddy’s band opened for The Artimus Pyle Band. Pyle was the drummer for Lynyrd Skynyrd in the mid-seventies and was the reason they actually came to Greenville. Artimus is a native of Spartanburg, SC, which is the adjacent county to Greenville. That is the sole explanation the band chose Greenville as the opening show of their American tour that autumn. He told my friend some great stories including many things about the plane crash that have never been related. I ended up with an autographed copy of the recently released CD of Skynyrd’s Edge of Forever. It now sits alongside baseballs signed by Hank Aaron and Roberto Clemente.

Before the travelling to art festivals, my buddy Mike and I would perform some local gigs every now and then. We never failed to include a couple of Lynyrd Skynyrd songs as tribute to our Southern brothers. “Sweet Home Alabama” always gets it’s whoops and hollers but performing a low-key blues influenced version of “Freebird” always brought out sad emotions from our audience.

So a few days after the thirty-year anniversary of the plane crash that saddened the South I ask you to look at us Southerners a little differently. There is no doubt that we still have our share of racist scum (David Duke comes to mind) but unfortunately there is still a worldwide problem with bigotry. We have never and never will corner the market of racial injustice. We just have a reputation that needs to go away like the flight of a free bird.

Most of us southerners have moved past this stereotype but it seems like it'll always be a cloud over our heads...