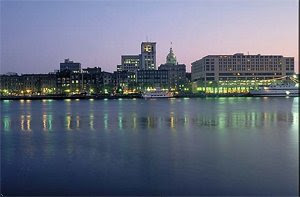 I've recently added two more shows next month. In fact they fill up the first two weeks of November and will occur in the same general location. Savannah, Georgia is a very artsy town and I'm excited about doing my first shows there.

November 2, 3, & 4 I'll inhabit booth #97 at The Savannah Seafood Festival. The show takes place on the city's historic waterfront district on River Street and the early forecast looks good. The only difficulty I anticipate is anchoring down the booth and artwork. The place is notorious for it's gusty winds (much like Charleston's famed Battery).

The next Saturday and Sunday will find me at Tybee Island, Georgia which is only about 15 miles from Savannah. The seaside resort is similar to Hilton Head but nowhere near as pricey. So if you're in the area please stop by and say hello!

And just a reminder, I'll conclude my shows for the year at the Craftman's Classics in Columbia, SC the third weekend of November and in Greensboro on Thanksgiving Weekend. I've already gotten e-mails from some of you saying you'll come by and visit with me. I really look forward to that!

Seafood Festival?? Sounds like a great weekend!
Tybee Island sounds awesome too! Too bad Jim and I can't make a getaway.
GOOD LUCK with all your remaining shows.

Mrs. Joe & I spent a few days in Savannah. If you get some time just take a walk around. The architecture is beautiful.