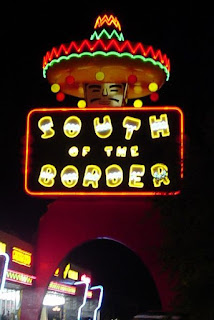 Pedro Says to Read This Blog

Long before Napoleon Dynamite made him internationally famous, Pedro was splashed across billboards along I-95 from Virginia to Florida. South of the Border will sell you just about anything from pecan logs and fireworks to porno and genuine Cherokee Indian moccasins hand-made in China. Not wanting to miss out on the opportunity to also sell tourists a bunch of crap sentimental souvenirs local Myrtle Beach shysters entrepreneurs opened t-shirt outlets all along the Grand Strand. In fact there is about one every 1/4 mile on Highway 17 between Pawley's Island, South Carolina and Nags Head, North Carolina. They are only outnumbered by the amount of pancake houses along the same route.

Many of them remain open 24 hours a day ready to sell that tourist heading home a reminder of their visit to the Carolina coast. Besides the t-shirt (3 for $14.99) you can pick up a snow globe featuring an alligator, a hula girl that dances on your dashboard, and the aforementioned pecan log. Don't forget the firecrackers which are legal to sale but illegal to light up! And all of these establishments have catchy names like Eagles, Whales, Jaws, Wings, Kings, Zings, Things, and Gay Dolphin (I'm not making that up!) rather than more realistic ones like Cheesy Cheap Souvenirs, The Tourist Trap, Buy It or Else, or Stuff You Don't Need.

Back in my day it was shark's teeth that made me and my brothers drag our parents kicking and screaming into one of these tourist traps quality retailers. That and the latest t-shirt designs by the rock band, Kiss (how fitting). These days the magnets that pull kids off Ocean Boulevard isn't so scary. In fact they're quite gentle creatures. Right at this very moment there is some fool shopper getting a free Hermit Crab with the $25 purchase of a crab habitat (plastic box) and special crab food (dried vegetable matter - they also eat fish fecal).

So Friday morning I'm headed into downtown Myrtle Beach passing the International House of Pancakes, the National House of Pancakes, the House of Canadian Bacon, El Casa Soft Tortilla, and of course Kings, Wings, and Whales. As I approach Eagles my jaw drops. The sign off of King's Highway pointed to a charred blackened mass of rubble. Obviously a massive fire had recently destroyed this beacon of pure American love for cheaply made things from Asian countries. The pure scope of the economic loss amazed me. A wholesale inventory worth several thousand dollars but with a retail value of several million was completely gone.

When I got to the location of the show I asked a local about the fire. Was it an electrical failure? Perhaps a spark from some shopper sneaking a smoke? Maybe in the highly competitive business of selling snow globes at the beach someone stooped to committing arson to corner the market? It was none of the above. Some highly skilled iron-on transfer operator happened to leave a t-shirt on the heat press before leaving for the day. He remembered to lock up and take the deposit to the bank but forgot to turn the heat press off. How ironic (no pun intended).

It wasn't until later in the evening that the real tragedy dawned on me. All of those Hermit Crabs must've perished in that fire! Oh the inhumanity! After living their lives so close to pecan logs they never even had a chance to taste one (after finishing up their meal on fish fecal of course). I called Joan hoping for some kind words and solace as I pondered those tiny crustaceans suffering in a literal Retail Hell. It was at this moment that I was reminded once again how much she and I were meant for each other. After pondering the above information for a few quiet moments all she could ask was, "how many Hermit Crabs do you think it would take to make a decent crab cake?"

By the way, here are a few more things seen or experienced over the weekend:

1. Christian Tae Kwon Do. That was the name of the place or at least what the sign said. What's up with that? Meet Jesus or get a roundhouse kick to the face?

2. Mr. Sub. Another name on a business facade. I'm certain they are just a competitor of Subway and other local delis but the idea of a better business model occurred to me. Say you don't feel like going to work tomorrow. Just give a call to Mr. Sub. Don't want to attend dinner at the in-laws? Put Mr. Sub on your speed-dial. Of course the franchise would need to expand to Mrs. Sub establishments. Somebody's got to pick the kids up from soccer while mom is at the day spa.

3. Suck Bang Blow. That's the honest-to-God name of Myrtle Beach's most well-known biker bar. I have no idea how they came up with that nor do I want to speculate. All I know is that it's a "drive through" establishment. The place looks like an aircraft hanger from the outside and from what I've been told has concrete floors. Evidently bikers entertain the patrons by pulling their Harley's into the club and perform a burn-out...inside...a metal building....with concrete floors. My ears hurt just thinking about it. If Slick and KimmyK meet me there someday the shots are on me.

Galleries: On the Road, Posts by Dad

great signs! thanks for the laugh.
We have Mr Sub here in Canada. I had never realised how ridiculous it seemed.

Hi - just thought I would comment that I was told that the name, Suck, bang, blow are the three cycles or strokes or something of a motorcycle engine. You know, my biker man, told me this when I asked who in God's name would name a bar that?!?!?

Those poor hermit crabs! How sad! How devastating! How hilarious! Thank you very much for this.

I think that Mr. Sub thing could be a hit. Why has no one thought of that? LOL!

And Suck Bang Blow might have to do with an engine...but it might also have something to do with a few other things. Hahaha.

Totally worth waiting for...glad you came back from the beach with good stories and all your tires intact!!!

Guess what Bennie? My parents are bikers :) My dad's down there for Biketober Fest now ;)

They usually bring back t-shirts from Suck Bang Blow. I don't ever get one though, because of the name. Heh. Say hi to my dad for me if you see him!

WWJD? I don't think Tae Kwon Do. Errr no.

Suck Bang Blow? Oh dear. Ohhh dear. First round on you....second round on me. Deal?

As many trips as our family has taken to the beach, we have never come home with a hermit crab, thankfully. Our seven year old begs and begs and begs each and every trip...but we hand him a bucket and send him out to the beach instead. Ooooh, mean Mommy and Daddy!

I grew up with a hermit crab...let me rephrase...my grandmother had crabs...er, hermit crabs that is, as pets when I was growing up.

I don't really remember anything about them but being fascinated with them.

So fascinated that when I saw a hermit crab in a pet shop, I bought one for my five year old nephew for his birthday.

He was so creeped out by it, he threw it on the floor and ran screaming in the other direction.

His mother (Boo's sister) had to take care of the thing. It lived for two years.

She is still mad at me.

Must be why she gave Frac live mice for his birthday. Bitch. LOL.