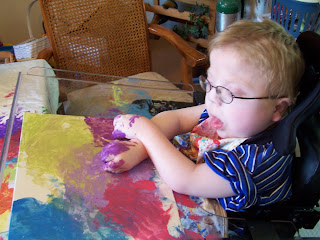 Cadmium Red Light: Ben is doing very well these days. In fact he's extremely well. As I knock on wood let me tell you that he's definitely a Waddell with attitude and all. Nurse Lisa related that The Boy really showed his temper today at school during therapy. He fussed the entire time about working out in the gait trainer. He was still pissed off when I got home from the gallery and let me know he was not in the mood for such a workout.

It's hard not to laugh when he's like that which makes him even angrier. I like that. There are times that all of us don't feel like doing something strenuous. Evidently today was one of those days for Ben.

He's been very animated lately which is an awesome thing to observe but at the same time he's definitely demanding more and more attention. It's good news in regards to his cognitive understanding but bad news in regards to mom & dad's lower back troubles. Ben is growing FAST just like any other child his age and the transportation issue is becoming more of a daily grind.

This is just another example of how parents of exceptional kids end up adapting to the situation at hand. The really cool part is that Ben seems to understand and is really trying to do his part in holding on as best he can. He hooks his arms around us and makes it clear he has no intentions of falling. I still find it amazing that after eight years he lets us know almost everyday that he's just another member of the family.

Raw Sienna: Tomorrow afternoon we all head up to Banner Elk, North Carolina for the Woolly Worm Festival. If you go back to the beginning posts of this blog you can read more about it even though I'll add a little bit more tomorrow before we leave town. To say we are looking forward to this trip is an understatement. The centerpiece of the festival are races to determine the champion woolly worm who will predict the winter weather in western North Carolina. The festival was organized over thirty years ago and has grown way beyond the locals' dreams.

Obviously it's mostly tongue-in-cheek but it now brings in about $50,000 annually which is allocated to local charities. That doesn't include the amount of revenue the community enjoys from leaf watching tourism and curiosity. The last figures I heard were that 25,ooo folks entered the gates last year. While waiting for each "racing heat" folks spend money on hand-made arts and crafts.

Last year while I was setting up my booth, the BBC was interviewing Mr. Woolly Worm. You just can't beat that kind of exposure! Jessie is chomping at the bit to race her own woolly worm. I'll make sure Ben has his entry to the "derby."

Thalo Green: I'm still way behind on completing many of Ben's paintings. I ask that you please spread the word about us. The sales of our paintings are a need for our family. I'll be honest and say that the revenue helped us make it through the winter months last year but I'll also tell you that it is much more important that we tell the world about young folks like Ben. He is The Rock of our family and a gift to all of us. Children with challenges like Ben have so much to offer and we want the world to know how incredibly gifted they are. They may seem so different but they are mostly better than the rest of us. All of them offer love without needing anything in return. Keep that in mind as you approach the holidays.

Galleries: About Ben, On the Palette, Posts by Dad

I am so thrilled that Ben is doing so well! It makes me heart burst!

good to hear that ben is doing well. i had to laugh though-who doesn't get pissy when they're in a bad mood and someone tries to "push" them? just makes ya fuss even more.

i hope you guys have a great time away this weekend. are you taking your paintings? good luck to you if you do.

Go Ben!! Good luck with the fair this week and with the wooly-worm races :) Got the Geraniums yesterday and will mail to Simon's teacher tomorrow. Beautiful.

I know that Dawn B. wants a painting--send her a note!