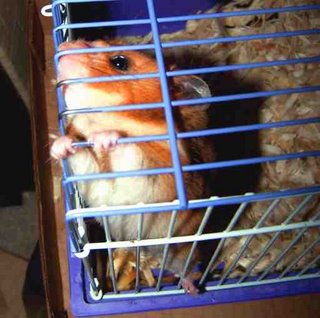 1. Sadie, the hamster has returned to lock-up. Her adventures as an escapee were not without merit. In fact she gained some needed respect from the two elders here in the Wah Compound. Layla the Feline has regularly brought sacrifices to the doorstep Alter of Wah. We feel that this is actually an unnecessary act of love and kindness on her part but it has been tolerated as long as the alter remains outdoors. Our fear was that Sadie would become the first official indoor not-so-random act of kindness on behalf of Layla the Feline.

Our fear was somewhat justified last weekend when me and the Fluid Guru Too were awakened by a blood-curdling scream along with loud hisses and growls. We knew Sadie had taken up residence under our bed since we were kept awake for three straight nights listening to a miniature chain-saw underneath our bed. I remarked to FGT that "the cat has the hamster." FGT flipped on the light just in time to find Layla the Feline fleeing the scene. Who knew a cat could scream? Who knew a hamster could hurl demoralizing insults at a cat?

Sadie eventually fell into the garbage can trap set by FGT. I guess starvation got the best of her. Also I deserve a thank you or at least a pack of smokes from Sadie. Strange scene of the week: FGT lowering a very, very small bucket to Sadie into her office trash can trap while reciting "It puts the lotion on."

2. Many, many, many thanks to Conni Togel and ArtByUs.com. I received an incredible pick-me-up e-mail from Conni yesterday. It still amazes me that one of the best artists I've ever met lives in Anderson, South Carolina! Anderson is just down the road from Greenville but has nowhere near the noteriety (can anyone detect the thick flow of sarcasm?). Conni is internationally known and it also amazes me that she and her family have taken an interest in me and my family. Conni wrote a very cool piece about me and Ben this week. You gotta check out Conni's site over there to your left under "Family & Artist Friends."

Although I've only met Peter (her husband) & Conni once it was enough to know that they are one of the coolest couples I'd ever get the chance to hang out with. I have a link to my gallery at ArtByUs but I highly encourage you to check out Conni's stuff too. Her art will give you a BIG smile!

3. What's up with Garth Brooks? I heard "It's the Most Wonderful Time of the Year" earlier today. Is he like a homophobe or what? Here's the line I heard: "and great happy meetings when friends come to call...". I'm one of those folks that think "politically correct" has gone WAY too far but is this supposed to be like reverse PC?

To be honest I've never liked the guys stuff after "Friends in Low Places." I will admit that I listen to "Rodeo" when it's on just because of the tribute to Chris LeDoux. Other than that I can't think of one reason why the guy is considered "country." In fact I think the guy has a speech impediment because I can hardly understand many of the phrases in his songs. I think Borat did a better job at country with his rendition of "Throw the Jew Down the Well."

4. Estrogen Rising. Well FGT just arrived home in the most female bear of moods. I'm a proud SAHD (damn, we sound like Islamic militant weirdos with phrases like SAHD & SAHM) with my own chores to do so sorry, I had a freakin bear of a day too, ya know! The X-Mas tree wasn't out yet which is her main gripe. Well it's out now. So are the freakin decorations. I made a meant-to-be-funny comment and I got the flying fickle finger.

I had a sick daughter to attend to. Day three rules: let her dribble on the ceiling and don't throw snot on the nurse! Think I'm a little bit punchy? And my lovely wife greets me by telling me "I'm number one." Well Mufasa, FGT. I hope you Rafiki yourself. The Tree Erection should be most fun this year!