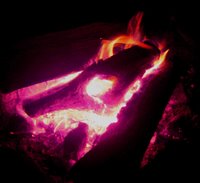 Okay, I really shouldn't be telling y'all this. Me and Ben's mom....BM?...nah, I can't do that...got into a major knock-down drag-out spitting nails with lots-of-bad-words-flying almost-not-sleeping-in-the-same-bed-but-still-did-but-don't-touch-me-or-put-a-finger-on-my-side-of-the-bed kind of fight yesterday evening. I mean there were tears and gnashing of teeth stuff going on in this household.

If we had split a quart of moonshine last night we couldn't have felt any worse than we did at about 7:30 this morning. During the "4th of July Is Just a Tad Late" display Jessie hid in her room. Unfortunately her cousin was also "In the House" so a full report obviously went to BM's...I mean Joan's sister. The memory of "Tantrums Is Us" was probably just as unsettling to Joan as it was for me while our red-headed Irish Rose sat and watched her mother get ready for work. Jessie showed no signs of favoritism much less any kind of acknowledgement that she had witnessed Mt. Saint Helen and Mount Vesuvius erupt simultaneous in her house.

Okay. So now we know she will store last night in her memory and use it one day when we are say, picking out a prom dress. Any who, little discourse was exchanged between me and BM....dang, I gotta quit doing that....I mean...ummm...Joan. Yeah, that's her name! E-mails were finally exchanged in a proper business etiquette format. We finally agreed that we both were wrong...to a certain degree. Okay we both were wrong, dang it.

I did send her what I consider a brilliant bit of prose detailing my side of the argument complete with imagery, humor, subtext, and even a subplot. I wish I could post it here but it would give away why we both went ballistic in the first place. Trust me, it is not important. The cause I mean, not the effect. If we actually revealed what we were arguing about we'd both have to kill ourselves. I'm serious! Most married couples know that already.

Okay it's time for my point. First is that Ben laughed like he was at Disney World last night during the initial explosion. I guess that shows his signifcantly higher intelligence versus me and whats-her-name. Secondly I came up with the following novelesque description of what me and whats-her-name have in common. It ain't a good thing, mind you, but at least we got that going for us! I'm glad we reconciled. We both were due for a meltdown but it was unfortunate that we had one at the same time. I love Joan (whats-her-name) very much and I hope we never meltdown again....yeah right.

"At least we both have something in common that I can honestly say I am ashamed of. When we take out the knives we know exactly where to thrust those suckers to extract the most pain, cause the most bleeding, and allow the most suffering without actually killing each other. In fact we can carve our initials into the stab wounds."