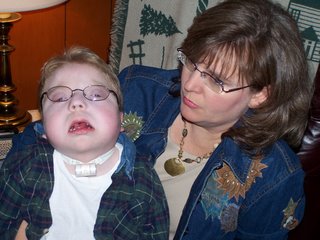 It's been an interesting week to say the least. Like Ben said, tonight was a very special night for all of us. My side of our family doesn't get together as much as we should and definitely not as much as we used to. I think we last gathered about a year ago. Ben was in the hospital over Christmas last year and nobody other than my Mom and some close friends visited us. Perhaps that left a bitter thought in my mind because I never invited them over to visit us over the past year or so.

My biggest disappointment in life was that I didn't get a chance to marry Joan a little earlier. Numero Uno is that the greatest mentors of my life would've approved 100% my marriage to Joan. She would've loved them too. It is a known fact around here that my mother would rather end up with Joan and the kids should some big catastrophic event occur.

My dad and my grandfather who I called Papa would've loved every one of their grand kids no matter what. Both of them had the kind of charm that every child was attracted too. I recall sometimes being jealous of having to share the love both of them could dish out. Both of my brothers inherited those traits and now I'm jealous of them.

Both of my brothers live a long distance from us these days. I honestly hate that for obviously selfish reasons but the biggest is that Ben absolutely loves being around them. Blair (the youngest) gets to see us more often than Cameron. You'd think there would be some kind've favortism. Nope. Whoever is there wins.

Me and Ben miss our respective brothers and uncles. We both send out our love to you and all who read this blog. We want all to be thankful for someone that has meant something to y'all during your life.

This is Ben's beautiful mother and my best friend. She really hates that I did this but I can't help it.

Sorry it's taken me so long to visit but here I am at last. What a good post..thanks for reminding me to be greatful..it's something I forget from time to time when I get too wrapped up in myself. Never a good thing.

What a beautiful picture of you & your mom Ben..she radiates love in it..as do you little one. It's good to see a family who's so close..who works through it all and who cares enough to share it with the world around them.

I've added your blog to my links and hope that's okay with you both. Will visit more often..until next time have the best week.

And I understand Joan's not wanting her pic up..alot of women are that way..been there many times. You've definitely got it right Bennie..she is a beauty.

A sincere thanks from all of us, Mary! You have a great story to tell as well!

For those that haven't clicked out to Mary's site either click on her name above and go back to mine and Ben's Blog Buddy list and follow the link to Diary of a Dope Fiend.

She has been nominated for a Canadien Blog Award for a piece of writing (you'll have to read it). Help her out by voting!