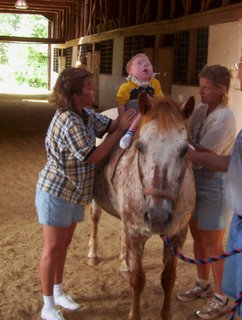 Okay, I'll get to the list in a few moments. Technically I guess the new week has already started. Most calendars have Sunday listed as the first day of the seven-day-cycle. Perhaps it was the Judeo-Christian environment in which I was raised that always makes me think of Sunday as the last day of the week. I'm sure most of you are familiar with that passage in Genesis about God resting on the seventh day.
Anyway, I guess that influence along with my most recent job (traveling carnie-folk art person) drilled that idea into my head. For more than half the Sundays since the new year I've been tearing down my booth after an art show has ended. And for most of those Sunday evenings I've had to take time to reflect upon the previous week. What sold? What didn't? How much inventory is left? What can I do different to improve next week?
So in habit I look back at this past week and all I can say is "wow." In the past seven days emotions have run the full gamet. A week ago tonight me and Joan were in the midst of a knock-down drag out fight. Six days ago we were worried sick about Ben's health. Three days ago we were proud parents of a Terrific Kid who attends Pelham Road Elementary School (Jessie made the Honor Roll at school...again...yesss!). Two days ago we cried over the death of a young wife and mother we had never met but wish we had. Last night we had a celebration.
Just a few minutes ago me and Jessie were standing out on our front lawn talking about the moon's phases. It is something she is studying at school. Here in Greenville, South Carolina clouds cover most of the sky this evening but we stood in the cold drizzle for a few minutes discussing where the moon would rise and set if we could see it. I'm a rather dramatic and visual person (duh!) and so I had Jessie pretend to be the Sun while I took the role of Earth and Moon. When we couldn't take the chill anymore we came inside and she told me of all the things she's learned about the Sun, the Moon, and the stars in regards to the calendar year. In a sense she told me about life as we know it.
I'm convinced of two things about life, at least for the moment. I'm certain there is a God (1) and that He really pisses me off sometimes (2). I guess that leads to a known sub-fact (2-a) that if I knew what God was really up to then that would make me God which I guess would be another sub-fact (2-b). That leads me to another thought: I need a job right now but I sure as hell don't want to be God (1-b or 2-c?).

Despite my ongoing battle with The Big Guy my reflections this week are very positive. I've had another seven days with my best friends: Ben, Jessie, and Joan. I couldn't ask for anything more. Okay, I lied. I can ask for a lot more but I'm not ready to push my luck at this time.

1. Despite seasonal allergies we're all healthy.

3. The color red (that is Ben's favorite color).

4. My Mom. Thank God she's still kicking like a mule. Joan would've divorced me years ago if she hadn't been around to referee.

5. My brothers and their families. Damn, I miss them so very much. All of them.

6. The Washington Center, Ben's school. I guess #6a through #6c would be Kristy, Doris, and Sallie. I love you ladies so very much! Of course y'all know Ben's feelings already.

8. Diet Coke. I blame Joan for this addiction.

9. Getting to earn a living as an artist even if it was short-lived.

10. Tie: Joan, Jessie, and Ben. There are times that I can just think about any one of them and my heart skips a beat. It is a privilege to live in their presence.

I told you I've ridden a horse!