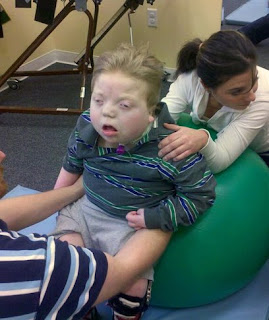 For the record this is day number 32 of my latest attempt at sobriety. I will happily and gratefully admit that the first 30 days were much easier than I expected. Day 31? Not so much but I will get to that momentarily.

Because of the original theme of this blog I have been reluctant to write about my progress toward sobriety. After all this is essentially Ben's blog, chronicling his life's adventures and his interaction with the rest of the world. In that regards I can proudly say that our boy is truly thriving these days! At times in recent weeks it has been emotionally overwhelming given his good health, physical growth (think "weed"), and increased cognitive development. It seems that everyone involved with his care and support have taken notice of just how far Ben has advanced beyond those early limited expectations some folks predicted. For this we are quite thankful!

But as a friend pointed out that from the beginning I have always written quite honestly about the entire truthful representation of raising a child with special needs including the good, the bad, and the ugly. If I were to leave out how I've tried for so long to medicate my depression via alcohol then I would neglect a good portion of our family's story the last 11 years (perhaps even longer). And it seems I have quite a bit to write about since depression and anxiety run so rampant among parents of exceptional kids. How do we deal with it in a healthy way? I have no idea at the moment but I intend to find out.

Overall I am rather pleased with where I am along this 12-step journey. This to me is obviously a good omen as I reflect upon where I was at this point on two previous occasions. Attempt #1 may have lasted about 3 weeks way back in the spring of 2004 - long before I started this blog.  Honestly I really don't recall much about it other than Joan and I were separated at the time. I do remember going to my first AA meetings and thinking "what the hell am I doing hanging around these bunch of drunks?" Evidently I also read some of the Big Book because I discovered some highlighted passages after I dusted off my copy last winter during Attempt #2.

That one lasted exactly 70 days. I know because I kept count...a close count.  Knowing what I do now it was doomed to fail but in all honesty that was really the beginning of my sobriety. I slyly mentioned last year how I went to New Orleans and quit drinking, wondering comically how often that happens? In my heart I still believe that. It's just that it took nearly another year before I was absolutely convinced that my life had become completely unmanageable.

As I mentioned, things have been drastically different this time and there is a good reason for that - I have completely embraced the proven 12-step method of Alcoholics Anonymous. Praying to my Higher Power as I understand it has been a daily ritual, sometimes hourly. Attending meetings with those other "drunks" has been enlightening, educational, and even enjoyable! And of course the Big Book is never far from my hands. Like I said, it has almost been easy...until Day #31. So what happened yesterday that made me seriously consider heading off to the grocery store for a bottle wine?

Basically I didn't practice what I just preached. The day began with a unexpected doctor's visit for Jessie and before it was over we had discovered our downstairs heat pump to be completely shot....in the middle of winter...no heat within the area of the house Ben spends all of his time. In between there were no prayers, no quiet times, no reading - there was just me doing what I used to do a month ago: attempting to deal with and manipulate the outcome of events I had no control over. Thankfully my "new me" was smart enough to find an AA meeting ASAP and the attendance was well worth it. Yeah, there is a bit of a chill in the house but somehow we are managing with the help of a few electric heaters and a rediscovered Higher Power. And it doesn't hurt that I collected this for the effort... 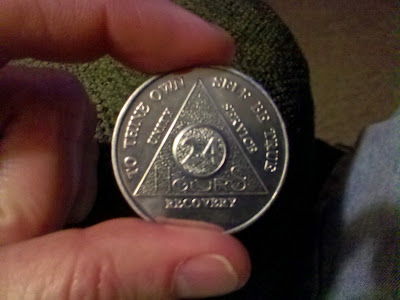 Good for you, Bennie! I'm sure it isn't going to be easy and there will be many bumps in the road (after all, special needs parenting IS a bumpy road!), but you handled it the best way possible. I'm rooting for you!

Oh, congratulations. I know only a small part of your struggles, and this work that you're doing -- this sobriety -- is courageous. I'm thrilled to hear that Ben is doing so well and look forward to hearing more about his "exploits."

In between hospital shifts Bennie, but I wanted to say, and I know very little about this, wouldn't it be better not to count days, despite that, rightfully so, they are a source of pride? Because if you count the days it's as though one day you will reach your goal, but your goal is infinite days. Each day is the most important day in reaching your goal, each day you are on the path, staying on the path.
Anyway, best wishes.

Congrats on your thirty day chip! Keep going, it gets better and better as you learn to reach out to God during tough times. Emotions are hard for folks like me, but I've finally found, after 14 years of sobriety, that emotions don't kill me - they make me more authentic. Sending love and prayers your way, Bennie.

I've had this post sitting in the dock, waiting for time to respond.

I've given up on having sufficient time, but I wanted to let you know that you're doing a great job with this journey!

I imagine it's a pretty rocky road more often than not, but hopefully it will soon be routine.