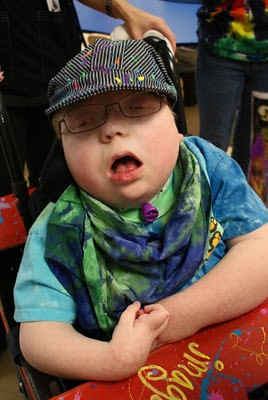 For the fourth October in a row the stakes were once again high. The pressure has been mounting for weeks now. The tension around here has been so great you could slice it with a knife!

"Boo in the School" took place earlier today at The Washington Center, Ben's special needs school. Because the bar has been set so high by the previous three Halloween costumes, two of which were the creative expertise of Ben's nurses, the expectation now is for us to at least make an attempt to match the previous year's effort. Thankfully we didn't disappoint.

Thought and preparations actually began in earnest around the end of August. The construction included our entire family as well as Nurse Tracy and two of Jessie's closest friends. This past week was a flurry of cardboard, duct tape, paint, and the down-loading of four versions of the song "Peace Train." One of them is actually an "Africanized" arrangement in honor of Tracy's native South Africa.

So we are happy to report that for the third year in a row, Ben garnered the top prize at his school! Now the hard part begins: trying to figure out what we will do next year... 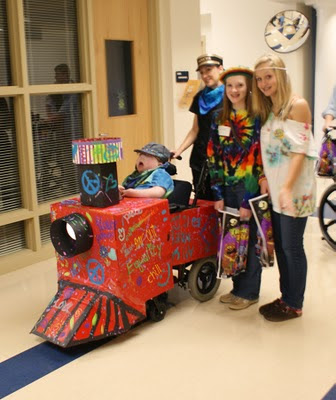 All aboard The Peace Train! Just for the day Tracy became a conductor rather than a nurse. Note the working light at the front of the train. 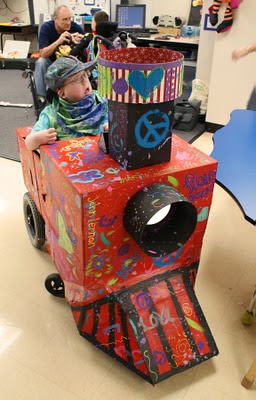 Our little engineer gets ready for the parade. 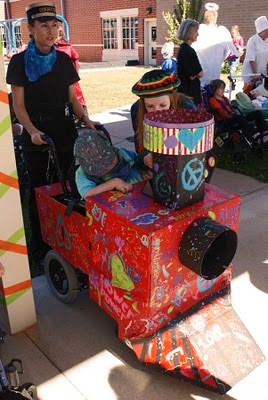 Our crew prepping for the judges. If you look closely you will see Jessie's iPod which was playing those Cat Stevens/Yusef Islam songs in sequence. Homage in a variety of bright colors to special peace-makers including Nelson Mandela, John Lennon, Jimi Hendrix, Martin Luther King Jr., and Bono. Although I painted the base coats of red and black Jessie and her friends (as you will see in another post this weekend) did all of the colorful decorations.

Glad our kids got to enjoy SOME of the Halloween festivities, even if they were too sick to go out that night.

GREAT costume! I know Ben had to love all the cute girls hanging around him in that picture!
Love to all of you!

oh my god, that is the best costume ever. and this is coming from a woman whose daughter was a girl in a bed one year and a washing machine the next. seriously - awesome.