A Visit to Ben's Studio 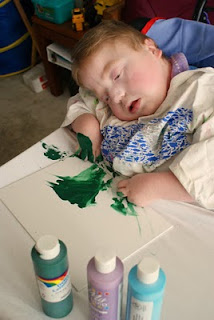 For the first time in 2010 Ben got to start some new canvases. He was so excited and fired up that both Nurse Tracy (his primary nurse) and Nurse Julie (his occasional evening nurse) got to work with him yesterday. He was so very full of energy which is not an unusual trait of Ben these days.

After I uploaded and began preparation of these post I was a bit torn. In one way I was rather disappointed in that none of them capture that energy I mentioned. However in another way I pleased to see once again how intense Ben is when he paints. This was Tracy's second "painting with Ben" experience and Julie's first - both absolutely marveled at the young artist's ability to convey what he wants, from the choice of paint color to the moment he says "I'm done."

I myself was blown away by his desire to all of the sudden mix colors on the canvas - something I rarely do. At first I thought it a fluke until he did it once more in his evening session. He is also (obvious to those around him) making a very distinct choice of colors much more dark and moody than I would choose. Is he developing his own style? I cannot answer this and none of us may never know. My gut feeling is that cognitively does understand what he is doing and therefore by creating art Ben is liberating himself from the constraints of his physical body. 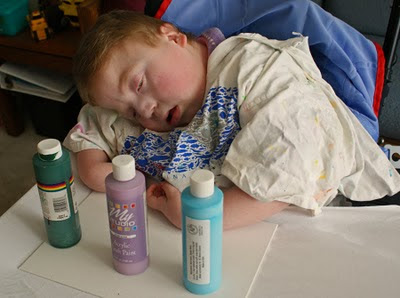 Ben chooses his color. We usually give him only three distinct choices but last night (we didn't take pictures unfortunately) we rotated several sets of colors using a process of elimination. It worked wonderfully! 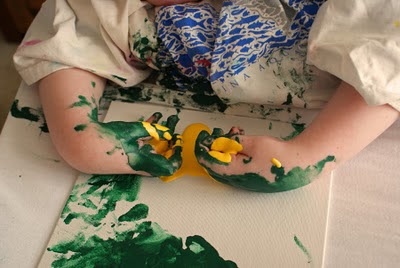 Earlier in the day I had mentioned that I didn't have a bottle of one of my favorite paint colors: lime green. Ben deliberately chose yellow (a first for him) and immediately blended it with the green he initially selected. The result? Lime green. Coincidence? By the way I have witnesses for all of these things! 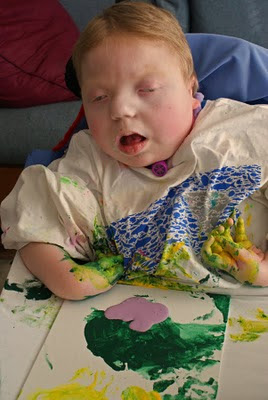 Ben was none too pleased about this shade of purple. We are now positive that he wanted a real dark purple color that he is used to rather than this lilac. We eventually told him he could wipe off the paint if he wanted which led to... 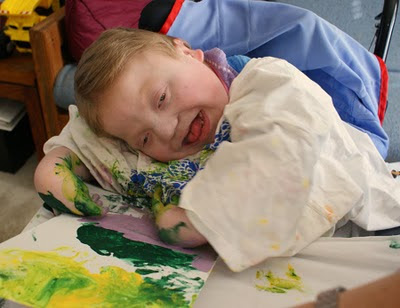 ...Ben wiping off the paint.

Galleries: Art by Ben and Bennie, Posts by Dad, The Boys at Work

I really need to visit...SOON!