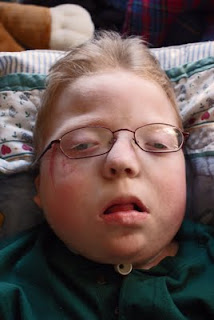 This was a direct quote from Joan about 2 & a half hours ago. It was uttered dripping with sarcasm as she cleaned up a spot in the carpet after the cat hacked up a hairball in the doorway to our bedroom. Shortly before this Joan had led a queasy exhausted Jessie into our bedroom to take comfort from her dad after a night of almost throwing up. As Jess crawled into our bed my wife was careful to keep the mattress from spreading more waves of nausea over to me since I'd tossed and turned all night with my own stomach issues. At least someone or rather something had finally barfed.

A few minutes later Joan would greet Nurse Dee to explain why Ben looked like he'd been in a Saturday night bar brawl. Although Dee has proven to be a trusted care-giver of our son she is still fairly new to the family. If there was an inkling of an urge to pick up the phone and report Ben's parents to local authorities as child abusers Joan wanted to nip that in the bud right away.

Of course that conversation was followed by a discussion about the possibility that Ben injured his fragile hips in the Halloween Bungee Jump off the couch sans the bungee. After careful consideration of all the circumstances the conclusion was made to keep Ben home from school today and cancel therapy for tomorrow. Who knew a severely physically challenged child could be so clever as to participate in Extreme Sports?

And poor Joan: up with Jessie much of the night with zero help from hubby facing a day at the office meeting with auditors. Good times people, good times! In golf, players use the term "mulligan." If you're unfamiliar with the word it basically means "do over." Yank your first drive off the tee into the duck pond on 18? "Hey guys, I didn't get a chance to warm up so I'm gonna try that one again."

In an Andy Rooney-esque fashion I'd like to make a suggestion to God (or whatever Lords of the Universe you might choose to believe in): I think we all deserve a mulligan on Monday morning every now and then.

KayTar got sick yesterday. She is home today and it running a fever, so tomorrow is out, too. Her first field trip is Friday, but I don't know that she'll be well enough to go.