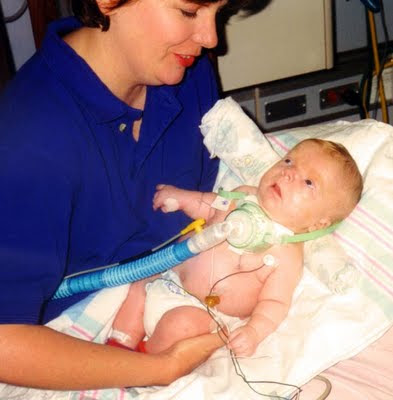 While browsing through some old images in search of artwork to use in this year's Christmas card collection I found these pictures of Ben taken during his three-month stay in the Neonatal Intensive Care Unit. Given that he is now a little over a month past his tenth birthday I find these photos so very important to our family now. Those 90 days or so were the opening chapters of our new life of exceptional living. To say we've come a long way over the last decade is an overwhelming understatement.

For a long time I couldn't look at any of these without shedding tears. Those three months hold some of the most difficult days of our lives. Trying to maintain some kind of balance between keeping a "normal" family experience for Jessie and learning a whole new "exceptional" existence with Ben was a juggling act not for the feint of heart. In fact those props continue to fly back and forth between the two parents still trying to keep that circus act going.

The picture above was most likely taken the night before we brought Ben home (note the lack of any type of IV port). At the time he required continuous oxygen, 24/7 pulse & O2 saturation monitoring, trache care (still doing that), tube feeding (still on that one as well), and a whole slew of medicines to administer throughout the day either by nebulizer or his G-Tube (ditto again but not quite as much). Even though we would have a nurse around the clock the first few weeks at home we were required to care for Ben by ourselves for 24 hours before being released from the hospital. 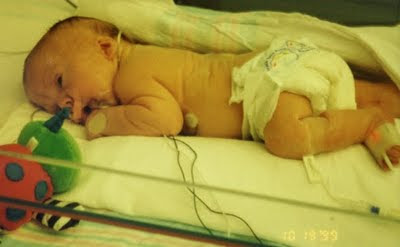 This is one of the first pictures taken of Ben. October 18th, 1999 was exactly one week before he dealt with the first of several bouts with RSV. In the early morning hours of October 25th we were called to the hospital to say goodbye to him. Ben had other plans. 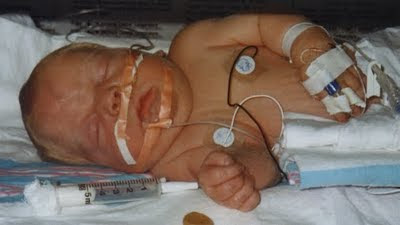 Even as a preemie Ben had his share of fat rolls. At the time (mid-November) his geneticist was very busy trying to identify some type of syndrome that he might have. Joan and I weren't convinced we were dealing with anything other than a premature birth. Now having a great deal of knowledge under our belts we can see the obvious signs that Ben had a genetic problem. 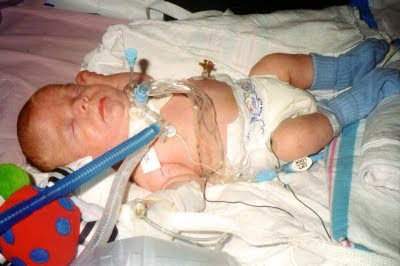 A little fighter rests up after his "one stop surgery shopping" experience. Early December Ben had a tracheostomy, a feeding tube inserted, and two hernias repaired in one afternoon. He was so tiny and yet he would still have more trips to the hospital in the coming months due to illnesses, hydracephalus, and a cleft repair. 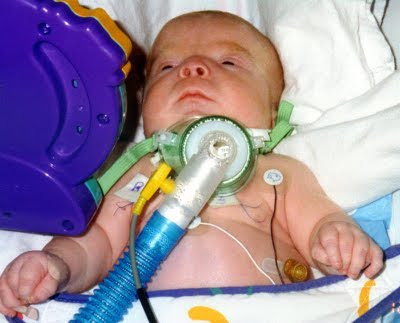 Thanks for sharing these, Bennie. It was nice to see photos of him when he was so small!

Another spammer. I hate that I might have to set up the extra step to post comments.