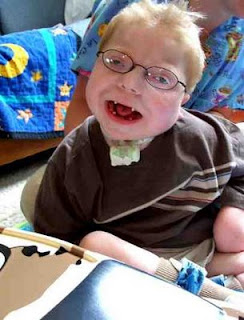 To find someone who embodies that particular phrase I have to look no further than across the room at my son Ben. He will turn 10 of age in a few short months and that is 10 years longer than he should have lived.

Ben was born with a rare genetic disorder called Pallister Killian Syndrome (PKS) leaving him with many challenges that he continues to overcome. He has endured numerous painful surgeries, strenuous physical and occupational therapies, and has even faced death on occasion. Seizures can be daily occurrences which interrupt signals from his brain that tell his lungs to breath or his heart to beat. Yet with all he has endured in 9+ years of life Ben is hardly ever seen without a smile; one so infectious that it is difficult not to return one to him.

As a father I had looked forward to many things once I knew my second child was a boy. Baseball was at the top of the list since it holds so much meaning and symbolism in my own personal experience. Ben even has his own “Field of Dreams” painted on his initial bedroom wall so he could look up before bedtime and gaze at my childhood heroes.

With the knowledge of his condition, after Ben’s birth the temptation was to embrace discouragement and disappointment. Knowing that the probability of me and Ben having a long toss together was not likely is still sometimes difficult to accept. Yet Ben has provided me and anyone else who has come to know him something a typical little boy can rarely achieve: inspiration to live life to its fullest!

My boyhood “heroes” were filled with names like Aaron, Bench, Yazstremski, Mays, and Clemente. My adult list of heroes has but one: Ben Waddell. This child has taught me more in his short life about courage, honesty, bravery, and selflessness than anyone else in my own 46 years. These days I cannot even imagine a life without an exceptional child living among our family and if you asked Ben’s mother and sister, they too would tell you that we wouldn’t trade our experience with Ben for anything else.

Truly inspiration is found by observing how well an individual meets and accepts adversity in life. Ben has not only conquered each and every one he has faced, he has actually flourished because of them! I thank God every day that I have Ben in my life.

Our hometown minor league baseball team is having an essay contest on "Inspiration." This is what I submitted as our entry. The Greenville Drive is the Single A affiliate of the Boston Red Sox. Wish us luck!

I love it! This is an amazing entry. Best wishes on the contest.

best of luck, that sweet face inspires so many

Ben is an inspiration to many, as are you as his parent. Wonderful post.

I've been stalking you for awhile now - I thought I'd come out of the woodwork to say hi! :)

I am just beginning my journey as a special-needs mom (Emma is 8 mos old and has CdLS), but I, too, thank God every day that he gave me Emma. Thanks for your words. Mind if I add you to my blogroll?

Stop by and say hi to Emma sometime! :)
www.watzspot.blogspot.com