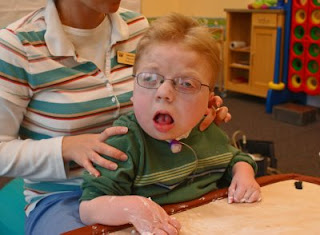 Achieving childhood goals for Jessie was a piece of cake. Untypically she was very fast in reaching them too: crawling around 6 months, walking at one year, reading before she reached kindergarten, and so on. Even her school teachers through the years have been impressed with how well and quickly she catches on to topics and ideas. It doesn't mean she's any smarter than her peers or we have some budding Einstein on our hands (spending an evening studying for a science or math test would nip that idea in the bud) but most likely has to do with her extreme determination and will to succeed.

Ben obviously has that same gene hidden amongst the non-typical ones in his body. The sheer fact that he's even alive is proof of that. Those who spend the most time around him see it and see it as vividly as one of the colors jumping off a painting of mine. There's a huge difference though between our children in the way we perceive their achieved goals. We can tell you where we were, what we were doing, who we were with, and the exact age Jessie reached one them. With Ben it's almost like being in a laboratory at times - observing the specimen, charting whether the goal has been repeated, making sure the conditions are similar, and even recognizing if he acknowledges his accomplishment.

Many times we've missed that "first" opportunity to actually see him growing into the big boy he is becoming but this summer we've been able to catch a few of them. Today he blew bubbles.

Barbara, his speech therapist has been working with him since spring to shape his mouth just so, to put just enough pressure through his lips, and place his tongue in the right position with the end result of having soapy water become floating bubbles via a hole at the end of a plastic wand. Because I was on the phone today at that time I was able to see it twice. Nurse Stacey saw it three more times. You'd have thought he'd gotten straight "A"s on his most recent report card had you seen our faces in the van coming home.

So Ben can't hit a baseball or catch a football...yet. But we have bubbles!

Oh how great!!! But the boy waits until I am gone to do it! argh! Ben Waddell I am gonna get you!!!
Vickie

That is AWESOME! Way to go, Ben!

Very cool, Ben!
BTW, we just learned that our Ben is going to have a classmate in preschool this fall who has PKS.