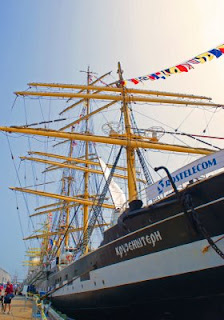 I have no idea if the kid was an officer but he wore the dress shirt and billed cap filled with enough “scrambled eggs” that let me know he held a higher position than many of the other Russian sailors that passed by the booth. Most of them were extremely business-like, never smiling, only giving a quick nod to acknowledge a greeting. And they were kids! Many of them looked like they weren’t even shaving yet. This particular young man was different.

I had seen him interacting with the food vendor next to me. He seemed generally interested in why Nathan’s Hot Dogs were better than the others further up the pier. My neighbor Eddie struggled to explain how his dogs were all beef, larger, and grilled. It was quite obvious that most of the visiting seafarers aboard the Kruzenshtern knew very little English. So a little later an older man approached the Russian with some questions about his vessel and thus began “the exchange.”

To be honest it was a bit humorous. From his reaction the old man obviously thought the young Russian knew more English than first thought. Yet the conversation continued for several more minutes. Neither one was going to let the language barrier interfere with their dialogue. Eventually there were hand gestures, nods of agreement, and even smiles that let me know that both had finally reached a common language of non-words. After a few more moments they shook hands. The old man wanted to take the young man’s picture in front of his ship and like all the rest of his shipmates, he obliged by putting his shopping bags down, standing at attention with his hands grasped behind his back. There was no doubt how proud that young sailor was of his sailing vessel. Funny thing, I immediately thought of Ben.

Just like this scenario, there is a communication barrier between Ben and the rest of the world, a wall that separates many exceptional children from others. Unfortunately most people aren’t like the old man, determined to break through the language barrier only to find a deeper form of interaction. Oh but for those that have the patience the reward is great. Just like the young sailor you get one proud individual and in Ben’s case you also get one huge smile as well.

To view some wonderful pictures of the Tall Ships leaving Charleston yesterday go here. 13 of the 18 ships featured at Harborfest are now headed to Boston for the next leg of the race. Look for them on TV this weekend as they parade around Boston Harbor.

Galleries: About Ben, On the Road, Posts by Dad

Just for the record, we (my family--not Jim) adores Nathan's hot dogs :)