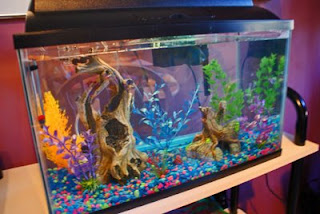 A Saturday Adventure
With Ben

We had a terrific family weekend. Several weeks ago Jessie brought home a few goldfish left over from a school science experiment. This led to Joan fixing up a small aquarium to keep them in which we placed in Ben's therapy room.

Both the kids actually had their own aquarium set ups several years ago. While Jessie showed a great deal of initial interest in hers at the time the care for both fish tanks quickly fell into my hands. As those of us who've ever cared for one know the chemicals in an aquarium have to be closely monitored - otherwise "sushi-cide" and other small environmental disasters occur.

While Ben kinda sort of noticed the one remaining tank the Great Ick Plague of 2003 finally wiped out the remaining population. All those filters, plastic plants, and even 20 gallon tank made their way into the attic. Thankfully!

Little did we know that Ben would be so entertained by those gold little swimmers! A few weekends ago we located the old equipment and set up a new home for some shiny colorful fish to entertain our son. Since Jessie spent the day with a friend Saturday we set out on a little adventure with Ben. 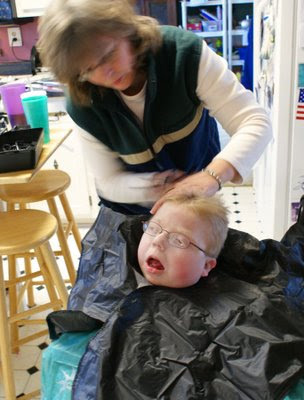 Joan makes sure Ben looks his best! She has been his personal (and mine) stylist for most of his life. Plus she gets loads of compliments from professionals! It's not that easy cutting the locks of a special needs child. 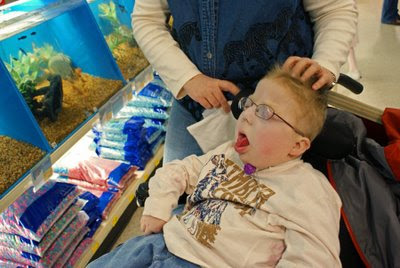 Here Ben is checking out his choices. To be honest we were a tad disappointed that he wasn't more excited by the fish. Evidently something, or more precisely some things caught his attention on our way in. Let's see if you can guess what they were...

Aside: no, your bookmark is not playing tricks on you. This was initially added yesterday afternoon. I've had a frustrating 24 hours with YouTube trying to get this to load. There is a second part that I've not had time to edit but hopefully I'll add that before the end of the week.

And for the record, please don't tell Joan we need a bird! Ben's reaction drew a bit of a crowd - in fact if you listen closely you can hear her saying "it's time to go." It was awesome to find a group of strangers rooting for our son...even as we were checking out.

He's fairly shaking with excitement for a bird!! WOW!

I can get you free zebra finches with cage....all you do is clean out the bottom with a paper towel. One of my students "gave" them to Kell for Christmas I am sure he would love to "share " with Kell. Kell loves the videos of Ben BTW.

I've got to hand it to Joan with the haircuts. And with scissors, no less. We gave up six months ago and take our Ben for clipper cuts.

I've just snooped around on the blog; it's so much fun!

It's also a perfect fit to the list of 'Special Assignments' on a blog a friend and I started recently (The Suite Life of Lucy and Ethel, a fellow member of Hopeful Parents).

Cheers from NC (with ties to Columbia) -
Helen/'Lucy'