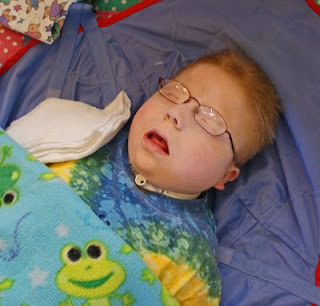 Not So Silent Night

See that kid over there? The one pictured to your left. that's our son Ben...sleeping soundly. He looks so peaceful doesn't he? You might be thinking, "what a cute adorable little boy!" And he is...usually.

Most of you reading this are very well aware of the challenges and obstacles Ben faces. He's wheelchair bound, extremely uncoordinated, difficult to understand - lots and lots of communication issues with an incredible lack of mobility.

So let me ask you, dear reader: where and how the hell did this kid acquire the ability to keep his three other family members awake all night long? Jessie's had many sleep-overs with her preteen friends over years which have included but not limited to jumping on beds, loud stereo music, movies until the wee hours of the morning, middle-of-the-night deliveries of a homesick child, a clogged toilet, and a sleep walker that didn't belong to us joining me and Joan in our bed. None of these experiences come even close to Ben's determination to keep all of us awake entertained between 11 pm last night and 8 am this morning.

For some reason Jessie has wanted Ben to sleep in her room the past several nights. Since school doesn't start back until next week we've allowed the kids to stay up later and sleep in while on vacation. Most nights during the holidays Ben has been completely zonked out when we've tucked him in. In fact he generally looks exactly like that picture up there. I'm guessing that's why Jessie wants him to join her - and who doesn't want a real life Teddy Bear?

But here's the problem: our real life Teddy Bear sometimes senses all those snuggles and kisses and caresses. In fact this Teddy Ben Bear feeds off of those snuggles and kisses and caresses. Unlike most Teddy Bears ours can't just become another pillow once the sheep have been accounted for and Mr. Sandman has dropped by for his nightly visit. For some reason our Teddy Bear becomes one of those adorable creatures from Monsters, Inc. and needs to make sure the rest of the household is aware of his special powers. From outside appearances he looks so cute and snuggly. But on the inside? His actions are dastardly wicked!

I heard the first throes of laughter around 4 this morning. Had I known what I found out later I would've left the boy in Jessie's bed. Evidently Ben had pulled hair, punched, hugged, and yelled Jessie into exhaustion. Instead my parental instinct kicked in and said, "Jessie needs her sleep- let's carry our boy child into our bed so both children can peacefully sleep." Reality quickly put that bullshit to rest. From Ben's point of view: "Wow! Here's Dad - time to play! Wait...Mom's here too? Party on, dudes!"

Shortly after, a sleepy 11-year-old sister walks into the room. Evidently Ben's disappeared and she's worried. A very punchy and sleepy mother tells her daughter that Ben is watching a Sponge Bob marathon downstairs and she could join him. 11-year-old doesn't fall for it since Teddy Bear has discovered the shorter version punching bag is now once again available available. He waves at her. 11-year-old crawls into a Queen-sized bed with the rest of her family. I swear to God I heard a sheep laughing at me at 5:30 this morning. It might have been Ben but I won't have any trouble serving Leg of Lamb next Christmas....or sooner.

Needless to say those of us that can actually walk, talk, and speak something close to the King's English are dragging around here like zombies today. Poor Joan is still at work as I wrap up this post around 7pm EST on the Sixth Day of Christmas. I will feed her poor soul and then put here to bed ASAP. Ben? Oh, he just woke up from an all day nap about two hours ago. He's already high-fiving invisible sheep and discussing bed-time plans with some dude from Metallica.

I did not know that sheep and Metallica work together...

LOL!!!!!! I'm sorry you are all walking zombies, except that crazy head-banging little man that looks all too innocent! He sure is a character ;~)

It doesn't matter how let they keep us up, they always manage to stay well rested! Not fair!

It's always the most innocent looking ones that wreak the most havoc, don't you think?

Thanks Maggie! The same wishes for you and your family!

LOL out of control!!

he's so sweet.
that's so funny.

he pulled jessie's hair though??? still...he's adorable...and you can't fault that lil boy a darn thing.

sleep is overrated if you ask me. *cough*